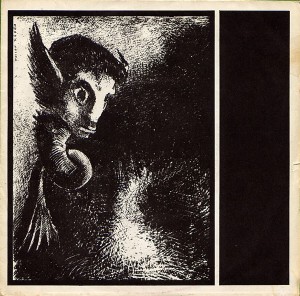 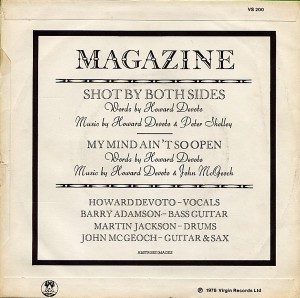 I was just getting my head around punk/new wave. At 14 years of age, I was still more into playing and watching football than I was getting my kicks from music. All that was to change over the next few years and I think it’s accurate to say that by my 18th birthday in June 1981, my head had been completely turned by some of the most amazing bands and performers who were integral to what we now lovingly refer to as the post-punk era.

It was around then, just as I was about to gear up for going to university that I discovered Magazine – the only problem being that the band were on the verge of breaking up.

There was a really interesting comment left behind not that long ago – I think it was from Drew – in which he said he envied someone discovering a class act fairly late on in their career as there is so much incredibly good music to go back and discover, and this was certainly what happened to me with Magazine. I can’t now begin to imagine being able to develop and expand my musical tastes without owning a copy of The Correct Use of Soap, the band’s third and best album, although there are moments on each of it predecessors, Real Life and Secondhand Daylight, which can held be held up as equally outstanding and memorable.

January 1978 was when Magazine released their debut single. As I said many moons ago when I pulled together an ICA (it was #35 in the series), Shot by Both Sides is one of the great post-punk anthems that had the audacity to reach #41 in the singles charts and somehow trigger off an appearance on Top of The Pops. The sight of Howie & co. – even in an edited two and a bit minutes clip – was something that scared the millions of viewers as sales dropped dramatically the following week and the band didn’t hit the Top 40. Indeed, despite what would become an outstanding catalogue of singles over the next three year, Magazine never got as close to a hit single as the debut.

The tune is one that dates from the fag-end of Devoto’s days with Buzzcocks, as can be seen from Pete Shelley being given a writing credit. Indeed, the latter used the tune himself some ten months later for Lipstick, the b-side to the hit single Promises, albeit, for some strange reason, Devoto’s name totally absent from its credits.

Shot by Both Sides still has the ability, what is now 40 years on (FFS!!!!!!!) to amaze and startle. All 3 minutes and 54 seconds of it, from the opening riff to the magnificently timed climax via the snarling, paranoid and terrified sounding vocal. It’s as near a flawless and memorable a debut as there’s ever been. Such a pity that the world wasn’t quite ready to embrace fully what this most extraordinary sounding and looking band were offering.

Time has been very kind to Magazine in that they gained increasingly in popularity in the years after their demise and their comeback from 2009-2011 in which they toured and released a new album was praised and welcomed in equal measures; at long last, the band members made some money. The one down side was the sad and constant reminder that John McGeogh, whose guitar work had been integral to making the band such essential listening, had passed away in 2004, albeit Noko, who was Devoto’s side kick in Luxuria, did a sterling job in difficult and challenging circumstances.

Is Shot By Both Sides their finest 45? I personally don’t think so and would afford that particular accolade to A Song From Under The Floorboards. But nowadays, if I’m down at the old-fogies indie-disco, I think I’d rather hear Shot…..although if truth be told, I’d much rather dance these days to Definitive Gaze which, when played through expensive and modern speakers, does sound as if it’s from another galaxy altogether.

7 thoughts on “IT REALLY WAS A CRACKING DEBUT SINGLE (13)”