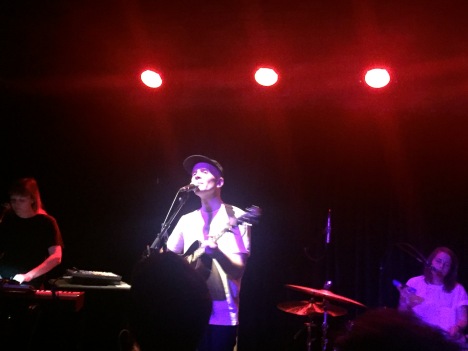 I’ve been the very lucky recipient of a load of guest contributions in recent days and in normal circumstances it would take a few weeks to get round to featuring them, especially as I’ve been busy with a few musings of my own that are scheduled to appear.  The solution is some unpaid T(n)VV overtime with a week of bonus postings to help keep things moving.  I hope you don’t mind.

And I hope you don’t mind that I’m kicking things off with one of my own.  One that is ridiculously fresh as it’s detailing events that have just happened.

A few months ago, I wrote about a Jen Lekman gig in Glasgow that had to end after about half the anticipated set due to the illness of the Swedish singer-songwriter.  I mentioned that a plan was in place to get to see him again later in the year…well, Thursday 30 August was the date for that.

The gig was taking place in Hebden Bridge, a town some 220 miles south of Glasgow, located close to the Yorkshire/Lancashire border and fairly equidistant between Leeds and Manchester.  It’s home to Hebden Trades Club, a venue with an amazing history, originally built-in 1923 as a joint enterprise by local trade unions and brought back to life in 1982 as a socialist members club and music venue. It has attracted a great range of acts over the years, many of whom wouldn’t normally stop in a town with 4,500 inhabitants and a venue that accommodates not much more than 200 folk.  It’s a venue that’s long been on my bucket list, and that of Aldo, and so we set off by train early in the morning for what we were sure was going to be an adventure.

Hebden Bridge is quite something else.  We arrived on a gloriously sunny late summer’s day and were immediately struck by how laid-back and bohemian it all seemed to be.  The local tourist website, for once, isn’t guilty of hyperbole:-

Hebden Bridge has been voted as “the greatest town in Europe” by The Academy of Urbanism, is officially the best small market town in the UK (winner of the best Small Market Town and People’s Choice categories in the 2016 Great British High Street Awards) and was described in British Airway’s ‘High Life’ magazine as “one of the world’s funkiest towns” .

Hebden Bridge’s people have been instrumental in creating and maintaining the town’s character. Possessing a strong community spirit, the town is renowned for its creative culture, with a fascinating history and a mission for sustainability. Unique double decker “over and under dwellings” hang on the leafy green hillsides above the town. Houses were built in terraces with 4 to 5 storeys because space was limited by the steep valleys and lack of flat land. The upper storeys face uphill while the lower ones face downhill, with their back wall against the hillside, each with separate entrances.

Hebden Bridge’s 18th century core and Victorian streets spread from the 16th century packhorse bridge over the Hebden Water that gives the town its name. The wavy steps, leading to Hebden Water alongside the bridge are a great place to stop and feed the ducks! Stroll along the Rochdale Canal, linking the Railway Station to Calder Holmes Park, the town centre, Little Theatre and Alternative Technology Centre. Try one of the Walkers are Welcome routes up to the National Trust Hardcastle Crags, and the sustainable Gibson Mill. Sample the vast array of great independent shops or the pavement cafes, a result of the award winning pedestrianisation scheme.

There’s also this on-line article by the BBC dating back to 2012 which reflects on why Hebden Bridge has become known as the lesbian capital of the UK.

The fact I’m typing so many words before even getting onto the gig itself will hopefully give you an indication that this is a place that is well worth a visit and look round… we didn’t mange too much walking as we were busy enjoying the pubs and saving our energy for the evening, but we vowed we would return.

Jens Lekman was in magnificent form, no doubt encouraged by a wonderfully appreciative and respectful audience.  Nobody chatted loudly to their mates while the band were on stage and the bar staff didn’t clatter about making noises with glasses, bottles and ice. It was an energetic, happy and classy performance lasting a shade under 90 minutes with the material split between his latest LP, Life Will See You, (released earlier this year) and his other EPs and albums all that way back to the earliest recordings in 2003. He really did cut the mustard. (and he was more than happy at the end of the night to chat to two very happy Scots) 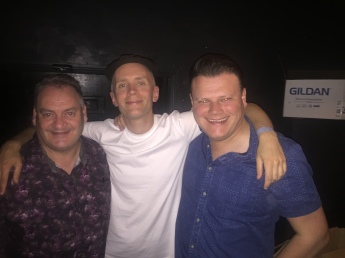 One final comment about the venue.  It genuinely is a co-op; I had a chat with the ‘promoter’ on the night (i.e. someone from the committee whose turn it was to be in charge of the door) who said that the venue doesn’t look to make money on the gigs but enjoys the increased takings via the bar and that the idea is to make it a unique and memorable experience for the musicians and audience alike.  There’s no sign of any heavy-handed stewards – again it’s all the club members who look after things – and at the end of the night there’s no great rush to get everyone out of the door. It was just all so perfectly civilised.  Can’t wait to go back.

Worth mentioning that Hebden Bridge has a few really decent real-ale pubs; not that I’m bothered as I’m a spirits/wine sort of fella, but Aldo did imbibe both pre and post-gig.  And paid the price the next morning as we had to get away earlier than expected due to a train strike that left a drastically reduced service. We had to take our leave at 10am and make our way to Manchester where a couple of items were in the pipeline.

I have to give my travelling companion full credit.  He had an appalling hangover, the sort that would have had me flat-out for the day.  But after his miracle cure of an 11am pint of cold and cheap cider, he was raring to go once again!

First item of the day, after the bonus of an unexpected early check-in at the hotel, was a visit to Manchester Art Gallery to enjoy True Faith, the temporary exhibition devoted to Joy Division and New Order.  Sadly, the exhibition closes the day this posting appears, as it’s one that comes highly recommended.  OK…there’s some conceptual stuff that went a bit over my head but the chance to look at some images, posters and artefacts from back in the day, as well as enjoy watching and listening to live footage and old promo videos, was a huge treat. 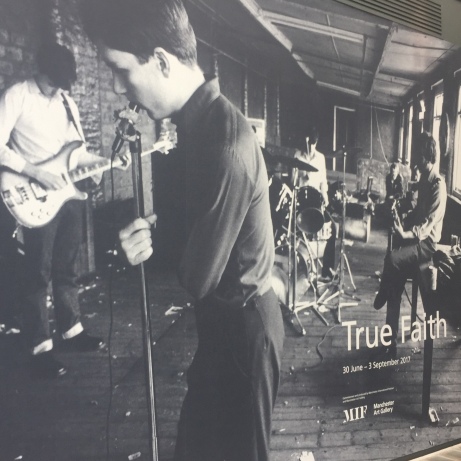 It was also great to be able to visit the more permanent parts of the gallery and take in some terrific works of art, including the unrivalled collection of works by LS Lowry.  The two hours inside the gallery seemed to fly in.

Believe it or not, things got even better as we were joined just after 2.30pm by none other than Swiss Adam, doyen of Manchester and the font of all knowledge about its taverns and ale houses, particularly those that are not situated on the main drags.  For eight hours we traipsed across the city, veering in all directions, all the while maintaining a running dialogue about music, football, politics, family life, work, Manchester, Glasgow, blogging, bloggers and sundry other items.  It was really just a continuation of the weekend we had enjoyed earlier this year in the company of Dirk, Walter, Brian, Drew, CC and the rest.  The gig and exhibition had been memorable, but the crawl around Manchester in the company of someone who is so passionate about his city and its people, took it a whole new level. 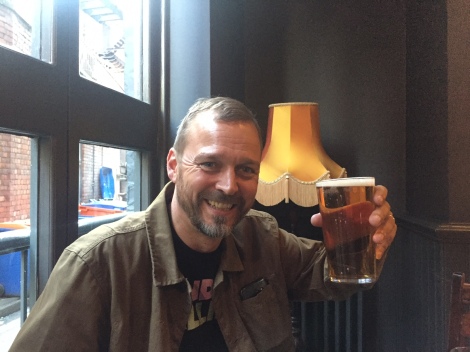 It was all over and done with by around 10.30, partly as we had just about hit our limits – Aldo was keeping track and there were 14 stops along the way.  And besides, I had stuff to do the following day that necessitated an early start.

I haven’t got round to mentioning that I have a new voluntary job on Saturdays and the occasional Tuesday evening. It was this new job that saw us have to leave the hotel before 8am to get ourselves back up to Scotland, so thanks Aldo for being so understanding when a long lie-in was what you most wanted/needed.

It’s a bit a of a dream job. And one I’ll get round to writing about at some point in the future.  It’s one in which I assist with things most days but occasionally have to do the whole thing myself…and Saturday 2 September was one of those solo days.

I’m the match-day announcer at Stark’s Park, Kirkcaldy, home of the mighty Raith Rovers FC.  Let’s just say, it’s been a while since the crowd were treated to a mix of Orange Juice, Aztec Camera, R.E.M., Go-Betweens, Dexy’s Midnight Runners, Echo & The Bunnymen and The Smiths in the run-up to kick-off (although it’s likely to be a one-off as the club often encourage fans to make requests in the week leading up to a match).

In the meantime, these are, respectively, for Aldo and Adam:-