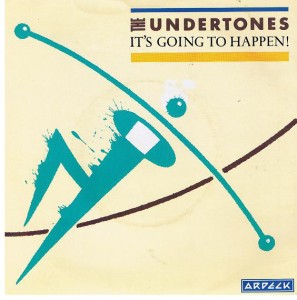 Those of you who are observant will notice the word ‘Ardeck’ on the front of the sleeve for the eighth single from The Undertones.

The band took advantage of a successful 1980 sales-wise to put out the feelers for a new label as they were unhappy with Sire Records unwillingness to promote them to any great extent in the USA.  They ended up on EMI who agreed to a licensing deal with all material to be released on Ardeck Records, a label which has since only ever issued singles, albums, compilations and re-releases by The Undertones.

It’s Going To Happen! was a Damian O’Neill/Michael Bradley composition, in all likelihood chosen by some mogul at EMI on the basis that they had been the duo responsible for the band’s only Top Ten single. It was released in May 1981 and reached #18 in the charts, an excellent achievement given it was by far their weakest 45 to date, with many bemused by the inclusion of horns within the song.

Also worth noting that the band managed to skilfully avoid the fact that the song, while on the surface sounding as if it was just another innocent sounding pop song, possibly about a failing relationship, was in fact an attack on the intransigence of the UK government to find a solution to the political hunger strikes that were taking place at the Maze Prison in Belfast.  If the real intention behind the song had been revealed then a radio and TV ban was inevitable and it’s likely that the band, and their families, would have run into real issues around personal safety back home.

The b-side is one of the most peculiar sounding things the band ever recorded.  The info on the single would indicate that it’s a cover of a song by an unknown band called Tommy Tate & The Torpedoes,

but it was later revealed that this was a name adopted by Damian O’Neill and was intended as a wee bit of a joke, but in a semi-serious way, at his bandmates’ expense whom he felt were sailing in choppy waters, beginning to moan and whine about their lot when the fact was they were enjoying success and earning more than they had ever dare dreamed of.

mp3 : The Undertones – Fairly In The Money Now