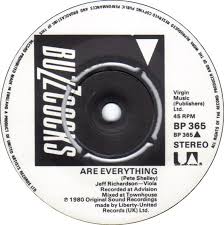 Moving forward to 1980 and what proved to be the beginning of the very end of things first time around for Buzzcocks.

They were no longer press darlings and the events of late 1979 when they had been blown out of the water on tour by their support band caused something of a crisis.

It would also seem, looking back, that they had fallen out of favour at United Artists and with no guarantees of hit singles the money spent on promoting and releasing the material was cut back.  Thus, the rather lacklustre sleeves as compared to the previous singles on the label.

It was also clear that the band were now being seen as a singles-only outfit which is why the first new recording from 1980 has ‘Part 1’ on the sleeve. Just how many ‘parts’ there would be in over the following months none of us knew.

With the benefit of hindsight, Are Everything is not the worst thing you’ll ever hear in your life but on release it felt awfully flat and devoid of imagination in comparison to what had come before.  And the gimmick of it seemingly fading out and then suddenly bursting back into life again some 45 seconds from the end must have it made a difficult sell to radio producers.  And yet it sold enough copies to spend three weeks in the UK singles charts in September 1980, peaking at #61 which was more than You Say You Don’t Love Me had ever managed.

The b-side is a Steve Diggle number that seems to have its roots in the rough’n’ ready stuff of new wave bands hoping to be discovered on the back of a catchy shout-out-loud chorus without much else to back it up.

The end truly was nigh.