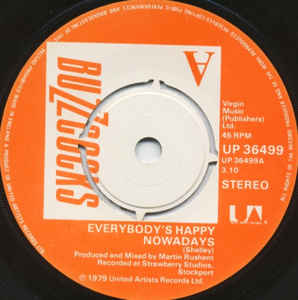 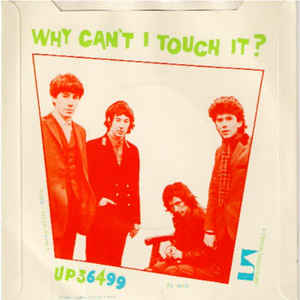 The Buzzcocks juggernaut showed no signs of slowing down as yet another brand new song became the latest 45 in March 1979.

However, this one didn’t do as well as hoped or expected, spending a miserly four weeks in the Top 40 and peaking at #29.

Not everybody would be happy nowadays.

I do recall there being something of a critical backlash against the band around this time.  Magazine had just released their second studio LP, Secondhand Daylight and its ambition and breadth led some to suggest that Pete Shelley was a bit of a one-trick pony incapable of lacing the Doc Martins of his former band mate. The fact that the new Buzzcocks single had the vocalist straining to hit the high notes was also a source of some amusement and ‘Happy’ took a bit of a caning when compared to what had been written before.

The b-side is a strange one.  A band which specialised in the classic 2-3 minute pop song put down something that stretched out over six minutes.  This could have been a pleasant surprise except for the fact that the song is not all that good and leaves listeners pining for the more simple shouty catchy stuff of old,