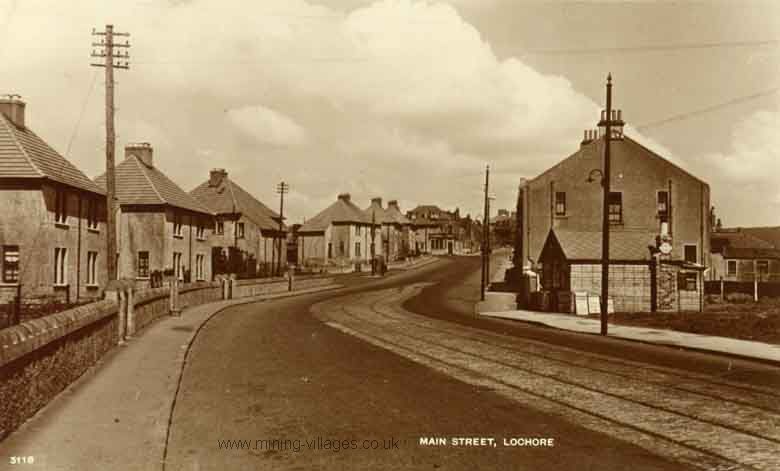 Lochore is described by wiki as a former mining village in Fife. Its largely inconsequential nature is such that wiki goes on to state:-

Lochore is largely joined to the adjacent villages of Ballingry to the north and Crosshill to the south.

I don’t think any of my regular readers will be vaguely aware of the existence of the village, other than perhaps Aldo as he was born and raised in another former mining village in Fife not too far away.

Lochore has a Co-operative Foodstore, Nisa, Mario’s Fish and Chip Bar, and Baynes, which also has a bakers and butchers on the street. Baynes factory is located in Lochore. There is also a small corner shop located in the other end called Lochore Foodstore.

There are two bars, Lochore Institute, a former miners institute with a bowling green, and the Red Goth.

The village has Benarty Medical practice and Rosewell Pharmacy and an NHS Clinic.

There is also a police station operated by Fife Constabulary.

As JC suggests above, Lochore is a place I’m reasonably familiar with having grown up not too far away.

The mining communities of this area of Fife were always hotbeds of trade unionism and left wing politics – and in fact the last remaining Communist Councillor in the United Kingdom, who only stood down last month due to ill health, represented Lochore as it was situated within his constituency.

The name of the pub mentioned above, the Red Goth, may sound unusual to some, and should you be wondering it owes nothing to young teens dressed in black, but does in fact come from the ‘Gothenburg System’ of public houses, whereby profits made by the boozer were used for the benefit of the community. Almost every mining town had a ‘Goth’ at one point, some still survive even if the principal that established them is long gone.

The town was always fairly prominent in local football circles as the village team, Lochore Welfare were always a decent junior side when I was growing up, and currently feature an ex-Scotland international among their ranks.

And finally, I was always semi-puzzled when I was younger if an item came on the news declaring major flooding or whatever in Lahore – as it sounds pretty much the same in local vernacular, the ‘c’ is very much silent. Only later did I realise there was a major city in Pakistan.  I was on holiday recently with a mate of mine and I mentioned to him that JC was doing a piece for his blog on Lochore, and he provided another nugget of info…..

It is not widely known but the famous novelist Sir Walter Scott has a great connection with the village.  There was a grand old property known as Lochore House which he bought in 1825 when he was at the height of his fame. The house was specifically a gift for his son and his new daughter-in-law who was a local lass whose name was Jean Jobson. Which fits in nicely to why JC is wittering on about this small corner of the Kingdom of Fife.

Yup…..it might not be a place of obvious appeal to rock’n’roll tourists, but one of its local facilities has  been immortalised in song.  This wonderfully named piece of instrumental music was the b-side to Goodbye Civilian, the band’s rather jaunty eighth single which reached #52 in the UK charts back in 1980.

Any other suggestions for unlikely places that have been immortalised in song? I feel a new series coming on……………………

9 thoughts on “A POST SO GOOD IT NEEDS THREE CONTRIBUTORS….”