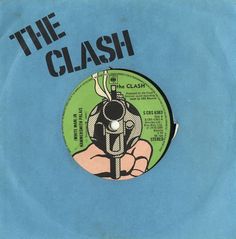 (As mentioned when this was featured in The Clash singles back in February, I held back then to this anticipated appearance to give my own take on the 45……)

I’ve repeatedly said that I was never a punk, but just someone who loved an awful lot of the punk-sounding records. However, the early singles and debut LP by The Clash weren’t things that I was initially fond of – they were just too raw and raucous for my tastes, which at that time were still evolving.

As with most teenagers, I got some money from my mum and dad and aunties and uncles for my 15th birthday, and so I traipsed up the road to the record shop. I can’t actually remember everything that was bought…there’s every chance I bought a bundle of disco stuff as Saturday Night Fever was all the rage and all the girls wanted someone who danced like John Travolta.

I do distinctly remember buying my first ever single by The Clash with some of the money – it was on prominent display in the shop having just been released a couple of days previously. The reason I remember all this is down to a sort of hero-worship of a guy called Mick. Not only did he work in a record shop, he also had his own mobile disco with lights and everything….and Mick said that day that if I wanted to buy something special for my birthday then it should be this new single called (White Man) In Hammersmith Palais.

When I told him that I didn’t really like The Clash, he asked me if I had ever really listened to them. I had to admit that I hadn’t other than what I had sometimes heard on the radio. He then offered to play the single for me there and then. Of course in order to retain any degree of coolness, I was always going to say it was fantastic…..

So I took the record home, but I was nowhere near convinced. This certainly was nothing like love at first sight. But like all new records, it continued to get spins on the turntable all the time, and within a week or so, after a number of listens, I realised, in a sort of Road To Damascus conversion moment, the song was something really different and special. And with that I felt I could classify myself as a Clash fan – one of the best decisions I ever made as the band and their music became a sort of secret password for getting on so well with people in the years to come.

The first example of this was a year later when I took on my first ever summer job, over a period of six weeks or so, at the age of 16. It was in a city-centre store that sold car accessories. I was easily the youngest member of staff – the rest of them were dead old being at least 19, while the store manager was ancient at the age of 25. I wasn’t able to do the sort of things they did, such as go out to the pub after work on a Friday night. But one other worker was interested in the fact I bought Melody Maker every week – although his own preference was for the NME.

That’s when I learned his taste was for punk/new wave, his favourite being The Clash. The fact that I liked the band was a big factor in me being accepted in the workplace.

A few years later, the time had come to move out of the family home and into a student flat. It was a case of trying to find folk you would be compatible with, and the deal with the two lads who I was eventually to move in beside was sealed when we all said that White Man…was our favourite Clash single. So much so in my case, that by this time (1983) I had learned to play it note-for-note on a Casio keyboard which I demonstrated one evening in a drunken stupor while another of the flat mates played bass and the other sang. The girls we had back that night were far from impressed.

I always thought I was in a minority with my love for this single over all others by The Clash. I was certain that White Riot, London Calling or even the cover of I Fought The Law would win out in any popularity contest. But no, there was some sort of poll a few years back which revealed that the most popular and enduring song was the one released in June 1978:-

It was unusually slow and melodic for a punk/new wave band. You could even make out a whole lot of the words without the need for a lyric sheet. It was also a song that lended itself to the use of your badminton racquet masquerading as your guitar….and it’s a song that has aged magnificently, sounding every bit as fresh, exciting and vibrant today as it did 30 years ago.

It’s hard to recall that all those years ago, the release of White Man… caused a bit of an uproar among the hardcore fans of the band. It was a radical departure from the short, sharp, loud and angry songs that had symbolised everything punk/new wave was supposed to be. It was, looking back, the earliest indication (notwithstanding Police & Thieves) that The Clash were no one-trick pony but in fact a quite extraordinary band capable of producing top-quality songs influenced by all sorts of genres.

I no longer have this single in the collection – another victim of the Edinburgh debacle of 1986, but by then it wasn’t a bit of vinyl that could have safely gone on the record player.

It was a record that had been played to within an inch of its life – it was worn out, full of scratches and jumps courtesy of it being shoved on more than once in a drunken stupor in which I bumped against the turntable. And because I imagine that’s how everyone who ever owned the single behaved with it, I’ve never pursued a copy via e-bay as the vinyl will be in a far from pristine condition. Instead, I’ve relied on an antiseptically clean copy that I have within the 3-CD box-set of Clash on Broadway.

And so next time round will finally reveal the choice at #1….