All of the Top 10 singles had appeared on the blog before.  I was tempted just to post links back to those postings but having come this far with another look at the 2008 rundown, I thought I’d stick with it. 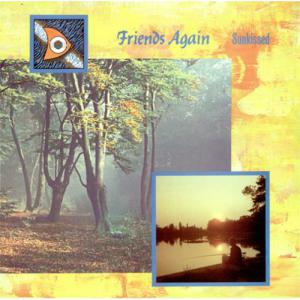 I spent four years of my life at University at the start of the 80s. I suppose I did what I was supposed to do in that I ended up with a degree that got me into meaningful employment, but I also was able, to use the ad man’s phrase, live life to the max and broaden my horizons in many aspects of life. Including music.

The band that I most associate with those happy days are in the chart at #10.

Friends Again weren’t around for all that long, forming in 1982 and breaking-up in 1984, having released just a handful of singles and one LP, and never making the breakthrough that so many fans and indeed their major record label expected.

I first came across the band when they played a gig at the Students Union at Strathclyde University. I was immediately grabbed by the sound of the band, and in particular the guitar playing of James Grant and the talents of Paul McGeechan on keyboards. And then there was front-man and vocalist Chris Thompson – cool as fuck was the phrase that came to mind, with a vocal style that was a cross between Motherwell and Memphis. Stuart Kerr on drums and Neil Cunningham on bass were a more than half-decent rhythm section too.

Before long, I was tracking down their singles, as indeed seemed to be just about everyone else I socialised with. Their initial single, Honey At The Core, was released on a local label, and sold in more than enough quantities to entice Phonogram Records to offer the band a deal.

Those of us who had seen the band a few times were delighted with the song chosen for the second single, Sunkissed, as it was always the highlight of the live set. It surely wouldn’t be too long before the boys were regulars on Top of The Pops….

But it flopped. As did a third single called State of Art.

All three singles had been more or less produced by the band themselves, and Phonogram decided that it needed to bring in someone who had a track record in the production stakes. So the boys were teamed up with Bob Sargeant who had worked with the likes of The Beat and Haircut 100, and went to work on the debut LP. The label also brought in Tom Verlaine ex-main man of legendary US art-rockers Television to work with the boys, while also allowing them to produce some stuff themselves. It was all a bit of a recipe for disaster as it turns out…

The early singles and the live performances showed Friends Again as a band who could throw in all sorts of music into the mix and sound fresh. There was some jingly-jangly stuff so reminiscent of the Postcard bands, there was a bit of funk/soul, there were more than a fair amount of country/folk songs with acoustic guitars, and of course there was a bunch of hugely dynamic and catch pop-songs that had so enticed the record label.

Sadly, the LP that emerged blinking into the bright sunlight – Trapped and Unwrapped – spectacularly failed to capture all of this. In this case, it is very easy enough to put the blame on the record label. Three of the twelve songs on the LP were vastly inferior re-recordings – Honey At The Core and Sunkissed, as well as Lucky Star (originally the b-side to Honey At The Core). Many of the other songs, loved and adored in the live setting, seemed stripped of their vitality. The acoustic songs were the only ones that escaped unscathed – proof that this was a record that was quite literally, over-produced. There was even a horn section deployed on some of the songs…

There is no doubt the band were bitterly upset at what was foisted on the record-buying public. Two further singles taken directly from the LP also flopped (the highest chart position reached was a very lowly #60), so the label, in desperation, re-released a remixed version of one of the earlier singles. It also flopped.

The band were very obviously despondent about the ways things had turned out – live shows became less dynamic and they seemed to be going through the motions. The buzz surrounding them had also gone, and where venues had once been packed, they were now half-empty.

I was at the last gig that Friends Again played, although I didn’t know it at the time. It was at a very small students’ union at Bell College in Hamilton, a town some 12 miles south-east of Glasgow, and not that far from where the band members had grown up. It was another lacklustre affair, not helped by a lack of chemistry on stage. Here was a band seriously pissed off with life and seemingly with one another. It might even have been the following day that Friends Again broke up…

James Grant and Paul McGeechan quickly went on to form pop/soul act Love and Money , while Stuart Kerr was soon on TOTP as the stickman in the first version of Texas with their massive hit I Don’t Want A Lover. Neil Cunningham went into artiste management.

Chris Thompson to all intent and purposes became a solo act under the name The Bathers, and ploughed a lone furrow akin to the softer side of Friends Again to much critical acclaim but little commercial success. Interestingly enough, when Love and Money also failed to really hit the big-time, James Grant embarked on a solo-career that was based on acoustic folk/country songs…

There are many hundreds if not thousands of bands with a story that is similar to that of Friends Again. They quickly get a local following that is hyped a little, they soon sign a deal with the devil and then are discarded when success isn’t immediate.

For years, the recordings by Friends Again were very difficult to get – it was mostly just vinyl as Trapped and Unwrapped initially had a limited CD release. And if it was available, it tended to be second-hand, or on import and expensive. But back in 2007 it was given a budget re-release, with the bonus that it contained the original recordings of Honey At The Core and Sunkissed instead of the re-recorded versions which means it’s bit easier to get a hold of the song that is #10 in the rundown:-

And for a bit of fun, here’s the b-side and the 12” extended version as well:-

Turns out, that having been more widely available in 2008 when I first put the chart together, the album is once again a bit on the rare side as it is out of print.  Second-hand market is the best way….