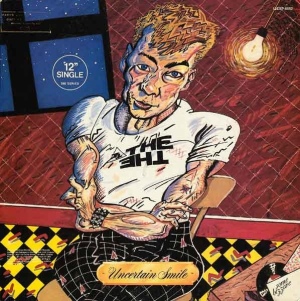 I have to admit that I really cringed when I read the part in Luke Haines‘ supremely entertaining bio Bad Vibes… that went into some detail about a huge fall-out he had with Matt Johnson when The Auteurs were the support act for The The. It’s brilliantly written but it leaves both protagonists looking like a pair of dickheads.

Now I know it’s not essential that you necessarily have to like everything about your favourite musicians, authors, artists, sports stars and so on, but if they have very severe character defects it does make it all the harder. Reading what Haines felt about Johnson was quite uncomfortable, but hey….it’s only one bloke’s view and opinion and it doesn’t detract from the fact that over a recording career that now stretches back some 30 years, a lot of the music written, recorded, produced and released by Matt Johnson is quite special (there’s also been one or two follies along the way, but everyone is entitled to an error somewhere along the line).

I can never make up my mind which of the The The LPs is my particular favourite. Some days I rejoice in the glorious synth-pop of Soul Mining from 1983, while there are other days when the sheer beauty of some of the lyrics and guitar playing from Johnny Marr make me think that Dusk from a decade later is preferable. But then again, when I’m in one of my melancholy moods, I can be transported back to a time and a place when I wasn’t entirely happy with my lot and the 1986 effort Infected was very much the soundtrack to my life. David Gedge may be the best songwriter about the pain from relationships, but Matt Johnson in 1986 perfectly captured fear, paranoia and isolation in a world that was far from secure and which right-wing zealots seemed keen to take to the brink of destruction.

But instead of looking at any of those, I’ve gone back even further in time, to the days of the early singles, different versions of which would ultimately appear on Soul Mining. And sitting in the cupboard is a 12″ single that I found in a second-hand store in Toronto back in the summer of 2007 for the princely sum of $4, released on Epic Records and brings together versions of two very early singles:-

Between them, the two songs run to a total of 19 minutes. Some of you might think that’s just a bit self-indulgent, but I most certainly don’t.