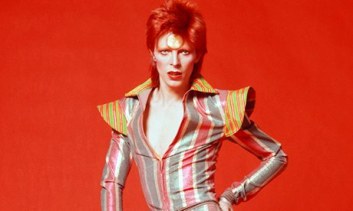 It was a stunning and wholly unexpected start to the morning to wake up to the news that David Bowie had passed away at the age of 69.  There will be many more people better qualified than I am to pen an appropriate tribute including many of those whose blogs are listed on the right hand side of this corner of the internet but I want to give it a go.

I was a fan, but not a devoted one. As a teenager, I liked his music….as I got older I came to realise that what I had liked I should have loved.  The first album of his that I was musically mature enough in my own development to appreciate was Scary Monsters and that LP remains my favourite to this day.

I did get to see him play live once in the 90s when he was touring the release of a greatest hits effort. It was in a dreadful venue at Ingliston in Edinburgh – a barn of a place with dreadful acoustics – but it did mean that another musical ambition had been realised.  Mrs V was with me, but by then she was a veteran of seeing the cracked actor, with her first being as a mere 14 year-old back in 1972 at the old Green’s Playhouse in Glasgow.  Between the great tours of the 70s and the stadium/arena things she went to in later years (not forgetting she was also at Live Aid) she was in his presence on maybe eight or so occasions and she remained a fan for life.  Indeed, we were only talking some 48 hours ago about her being at the Ziggy Stardust tour and how the memories of that gig were still so fresh in her mind.  She’s pretty shaken up today.

His was a body of work that surpassed just about everyone who is/was part of the modern music industry.  Of course it is not without flaw – no-one who makes music for almost 50 years will be any different – but right now it is much much easier to recall the great songs rather than the few clunkers.  The fact that in the first few hours since the announcement that so many different tributes on social media have highlighted so many different songs is testament to the quality of his work.

It is a very sad day.

PS : BBC Radio 6 is a doing a tremendous job with the tributes being paid.

PPS : I mentioned that many other members of the blogging fraternity would likely make their own personal tributes…here’s some links (which I will endeavour to update as and when I can)

And a special mention to Echorich, a really dear friend of this and many other blogs who is one of the biggest Bowie fans there is and for whom today must have been awful and difficult to get through. He wasn’t alone mind you…Mrs Villain ended up working from home today so that she could shed tears as and when she needed. She tells me that BBC Radio 6 continued to surpass itself all day.

Tomorrow will be another difficult day for many.  I’ve decided however, to make it business as usual and to stick with the post as I had scheduled and to do likewise for the rest of the week and beyond.  Will understand if folk can’t be bothered to read and/or comment.