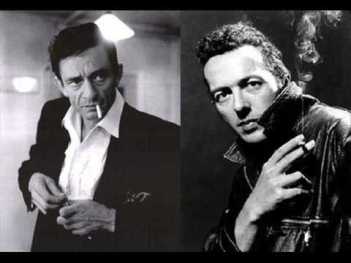 The following is a repost from the old place.  It originally appeared on 16 December 2008 and received a number of lovely comments.  I thought it was worthy of a cut’n’paste

With a career that lasted well over 40 years, Johnny Cash attracted millions of fans the world over, many of whom stayed with him through thick and thin – particularly in the late 70s and 80s when his recordings were infrequent and sold poorly.

It is of course no secret the Man In Black enjoyed enormous critical acclaim and re-assessment in the last few years of his life, as well as finding a whole new audience and set of fans, thanks to the series of LPs he recorded between 1994 and 2003 with Rick Rubin, someone whose initial burst with fame came courtesy of the Beastie Boys.

The merits of these LPs have split hardcore fans – there are some who think they’re an abomination made up largely of glorified karaoke, while there are others who rate some of the songs, and in particular the interpretations of the covers, as among Cash’s best.

It’s actually a difficult one to reach a definitive conclusion, partly because the advancement of recording and production techniques make the Rubin recordings completely different from anything else that Johnny Cash ever did. And it’s also clear that his voice wasn’t nearly the weapon it used to be – but then again, once any singer goes over the age of 40 or 50 they will never be able to hit the notes they could when they were in the 20s or 30s – for instance, ask Morrissey to try and sing the falsetto on Miserable Lie from The Smiths debut LP and I bet he’ll fail miserably so to speak….

I reckon Rick Rubin took a big risk when he initially partnered up with Johnny Cash, as no-one knew just how well the CD-buying public would react, and all too often stars of days of old come back and give us total turkeys. What we got over those last few years were a series of albums with a great deal of magical moments, but which also had some stuff that was dull and stodgy.

However, what it did do was create a new appreciation of the talents of Johnny Cash, and I’m guessing that almost everyone who bought one of the Rubin records would have at some point later and picked up one of the many compilation CDs released over the years that feature those mono-recordings with The Tennessee Three, not to mention the songs recorded live during concerts in infamous jailhouses.

The final LP released before Cash’s death was The Man Comes Around. By this time, illness had ravaged the singer’s body and his voice was not in great shape. There’s a lot of painful listening over the 16 tracks, and I think Rubin recognises this as evidenced by the inclusion of supporting and backing vocalists such as Nick Cave, Don Henley and Fiona Apple.

Nevertheless, the opening track after which the LP is named, is a truly astonishing bit of work. It is one of the last songs ever written by Cash. It has a hugely complicated lyric that weaves all sorts of biblical quotes into an incredibly catchy tune that is part-country, part-folk, part spiritual and part-rock. It’s a song written and sung by a man who knew he was dying and it is clearly an effort to leave one last might of memorable music behind amidst a tremendous legacy. In the accompanying sleevenotes, the great man admits “I spent more time on this song than any I ever wrote. “

It’s an LP best known for the cover of the Nine Inch Nails song Hurt, thanks to an unforgettable video that featured very heavily on the worldwide variations of both MTV and MTV2. The success of the video helped it to reach sales of more than 500,000 copies meaning for the first time in more than 30 years Johnny Cash qualified for a gold disc, an astonishing feat for someone who not too long beforehand would have struggled to get 1% of that amount of sales.

And while I’m rabbiting in this incoherent fashion, I think it’s a good time to share one of my favourite Cash recordings, a duet with Joe Strummer, covering a Bob Marley song:-

3 thoughts on “DEATH IS NOT THE END”