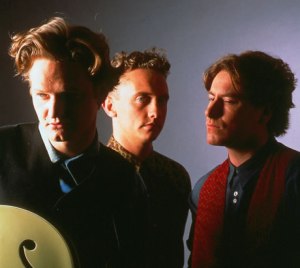 There were certain 80s Scottish singers and bands that I admired and respected rather than took a shine to. It wasn’t that the songs and music were dull, boring or uninspired but more that the delivery and production were just too clean and polished for my liking.

The band most probably at the top of this list would be The Big Dish although Danny Wilson would likely be not too far behind. Both had ridiculously talented frontmen who couple pen and hold a tune but neither did enough to hold my interest all that much.

The Big Dish, from the very working-class and industrial town of Airdrie some 25 minutes slow train journey to the east of Glasgow centred around vocalist and guitarist Steven Lindsay on whom Virgin Records placed a lot of faith tolerating a number of band changes in the early years from their formation in 1983 and allowed the best part of two years for the initial singles to be released during which time the band built up their fanbase with a number of high-profile support slots to touring bands. Two albums and six singles yielded little in the way of commercial success and Virgin dropped the band in late 1988.

They were soon snapped up by East/West (part of the Warner Brothers family of labels) but in all essence it was now in the main Lindsay backed by some very talented and in-demand session musicians. The first release on the new label actually took the band into the singles charts at #37 with Miss America but two singles and one album later the band called it a day at the end of 1991.

Stephen Lindsay initially maintained a career in the music industry working with highly regarded composers like Craig Armstrong and issuing solo records. He later turned his hand to visual art where he was acclaimed by quite a number of critics and the, in 2012, The Big Dish reformed for a show as part of an annual music festival in Glasgow where it proved to be one of the most sought after tickets.

Here’s the song of theirs that is probably the most highly regarded from their back catalogue. Virgin Records tried to make it a hit on two occasions

This particular series is now going on an extended break but it will return at some point in the future.  I’m doing something else with Saturdays for the next wee while…all will be revealed in seven days time!