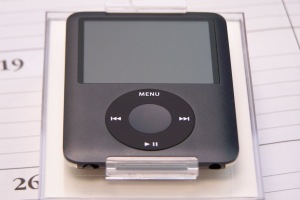 Part 3 of Ruby Trax will have to wait. S-WC has an important few words to offer up:-

I guess that in the end Billy Bragg was right. I tried to mix pop and politics and ending up asking myself what the use is. The message was completely irrelevant. Partly because I didn’t give people the set list and by mistake stuck the ipod playlist on ‘shuffle’ instead of just play. So I wasted time trying to find cover versions by bands starting with ‘Y’.

Still the music went down well. In parts. I put a piece of paper on everyone’s desk with the question on it and that was that. They tried. Some obviously guessed. Philippa – one of the mumsy types put this “there are 38 all of them apart from Blue Monday and Yazoo are cover versions”.

My hipster boss got worryingly close, “27, and I love the Vaccines cover version and the Rolling Stones one” (I think he meant the Concretes version of Miss You).

David the Northern Soul guy won the Mars Bar – he said 24 – he was closest – I think he was using Shazam or Google though, still he made the effort and that’s what matters. He did ask for a copy of every song on the set list though as he thought it was the best selection (since his).

I guess what was good is that it did stimulate debate and some reaction. The Eels cover version of Get Ur Freak On provoked laughter. The Radiohead one started a lengthy debate as to who was most depressing Thom Yorke or Morrissey, which soon descended into a ‘Who is the Biggest Twat’ Argument Thom or Morrissey (Morrissey won on both questions by the way) and the Flaming Lips version of Can’t Get You Out of My Head was according to James, the token gay guy, ‘one of the worst things his ears have ever heard’, for what its worth I sort of agree with him. But almost certainly not for the same reasons I imagine.

This week on Friday we have Kelly, she has already told me she is doing back to back Usher, Maroon 5 and Prince. Luckily I have a prearranged meeting in Torquay to go to.  Torquay on a Friday morning is not much fun, but compared to three hours of Maroon 5 and Usher, its like a weekend at Keira Knightly’s house.

For those still wondering – there were 25 cover versions in the set list – well done to anyone who guessed it. Dirk you got closest on the comments – so I’ll send you an email in the next few days to get an address to send you almost a complete Bounty. On that subject – has anyone else noticed that you can no longer buy red Bounty bars, just the inferior blue ones. Probably just me.

Here are some of the other tracks from the set list that I didn’t post and as its cover version week on T(n)VV they are all cover versions. Perhaps. Oh and one I didn’t include on the set list but have included here because I happen to love it.

JC adds…….Many thanks to S-WC for such a great set of posts and to everyone who joined in with the comments. I just couldn’t resist offering this up for those in his office who took part in the great philosophical debate last Friday:-

4 thoughts on “A LAST SECOND CHANGE OF PLAN”