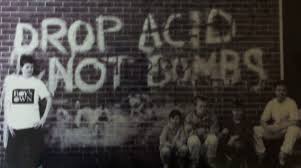 If yesterday’s friend electric can provide 500 reasons why the 80s didn’t suck, then today’s featured blogger extraordinaire can give you 500,000 reasons why club music is the dog’s bollocks…

Ctel, the brains and driving force behind the legendary blog Acid Ted is one of the real inspirations for what I do. There’s a whole load of reasons for that, and those of you who have been on this journey with me since back in September 2006 will know many of those reasons why.

Back in February 2010, when it looked as if Ctel he was giving up on blogging I typed:-

“Now I can’t claim to be a huge lover of the dance genre that was championed over at Acid Ted, but I made sure I went in on a very regular basis and read all that was said if only to learn a lot more about acts and music that was often alien to me.

It was actually almost impossible to keep up with ctel’s prodigious output – sometimes he could produce six postings over a 24 hour period. He began his A-Z of the genre on Thursday 14th February 2008. Two years to the day afterwards, he completed his epic task and laid down his keyboard.

Ctel is a long time friend of TVV. He has posted here on a reasonably regular basis and not just when I’ve been away on holiday and given him the run of the place – I will always be in his debt for him stepping in to keep the blog going during a spell when I ran into some difficulties with my hardware crashing at home, all the while keeping Acid Ted ticking over as well.”

Little did I know that within a few months, I was to experience a personal and sudden tragedy when my young brother died in a car crash…without any prompting, Ctel again took over my blog for an extended period and elicited some astonishing pieces from many people as my internet friends rallied round in my hours of need. I can never thank him enough for that incredible gesture….and its the loss of those particular postings when google pulled the plug on the original blog just over a year ago that really angered and upset me.

I was lucky enough to meet the great man in the flesh a few years back when we shared brunch in London one Sunday morning when I was down there for a weekend break.  He was tremendous company and we spent the time dissecting music, politics, sport and life in general; if anyone passing by looked across or listened in they must have thought we had been mates for decades and that the brunch was some sort of ritual we carried out on a regular basis such was the flow of chat and the sheer joy we took being in each other’s company.  I’m hoping to be down in the capital for a few days later in the year and fingers crossed we will again meet up.

I had planned to feature some dance music to go with the post but instead I’m turning to another band who meant so much to both of us when we were of that age when going along to gigs was the be-all and end-all.

Carter the Unstoppable Sex Machine came out of seemingly nowhere to become bona fide chart stars in the early 90s. Much of their meteoric rise can be attributed to the energy and vibrancy of their live shows, all of which got off to the most perfect of starts thanks to the deployment of an MC called Jon’Fat’ Beast.

Sadly, Jon Beast passed away a few days ago, but the extent to which he was an essential part of Carter USM, as well as wider the role he played in the music scene in London, can be seen from this piece in one of the major UK newspapers:-

“Tributes were paid today to Jon “Fat” Beast, the music promoter who was best known as the warm-up act for indie pop band Carter the Unstoppable Sex Machine.

Fans and friends pledged nearly £5,000 to an internet appeal to raise money for his family following his death aged 51.

Carter lead singer Jim Bob, told The Independent that the former MC had been ill for some time and was understood to have been suffering from septicaemia.

“He didn’t have any money and he had been in and out of hospital for the past few years. We got a message a couple of days ago that he was quite seriously ill then pretty much a day later we found out he had died,” he said.

Beast was a much loved feature at Carter gigs before which he would strip to his underpants and take to the stage with a slogan scrawled on his bare chest whilst fans shouted “you fat bastard” at him and he traded insults back.

But before that he had run the highly influential Timebox club at the Bull & Gate in Kentish Town, north London.

In the mid-1980s it was one of the most important venues of the then thriving indie live scene celebrated as a place that would give unsigned or even unheard acts the opportunity to perform in London.

Among those that played there were Voice of the Beehive, Half Man Half Biscuit, Jesus Jones, Pop Will Eat Itself and Carter USM.

“We met him when we played there, and he was doing the lights as well as running the club. For some reason he had his own microphone and he used to heckle us from the stage,” recalled the singer, now an author whose latest novel, The Extra Ordinary Life of Frank Derrick, Age 81, is written under the name J.B Morrison.

“He was a very lovable character,” he said. “He asked us to come on tour but we said no and he just turned up. The audiences really liked him,” he added. “When we reformed in 2007 he came back for those shows. He was a handful. He was so enthusiastic about everything all of the time but he was genuinely lovely,” he added.

Carter are due to play their last ever shows in November which sold out in a matter of minutes. These are now expected to include a tribute to the former warm-up man.”

These are for ctel and all Carter fans:-