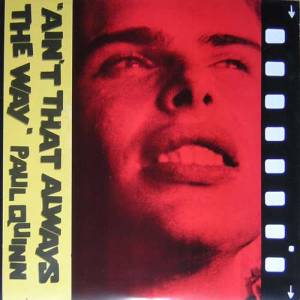 I’ve reached a great part of the alphabetical rundown.  The word Paul followed by the word Quinn.

Today it’s just those two words.  The next three Saturdays have the word ‘and’ to follow. I make no apologies at all.  All you need to know about this talent and genius can be found at the The Punk Rock Hotel

This single has already featured on T(n)VV back in October 2013.  As I said at the time, it’s from 1985, it’s on Swampland Records and it is credited to Paul Quinn alone for the reason that the song’s composer, arranger and main instrumentalist had contractual issues preventing him being fully credited as a performer.  Here’s the tracks from the 12″:-

The middle track is an instrumental by Edwyn Collins & Paul Heard. Now…..the only info I can find on any musician called Paul Heard is that he was a keyboardist with M People. Does anyone know if it is the same bloke on this track?

Oh and Corrina Corinna is a song that dates back to 1928…it has a fascinating history.