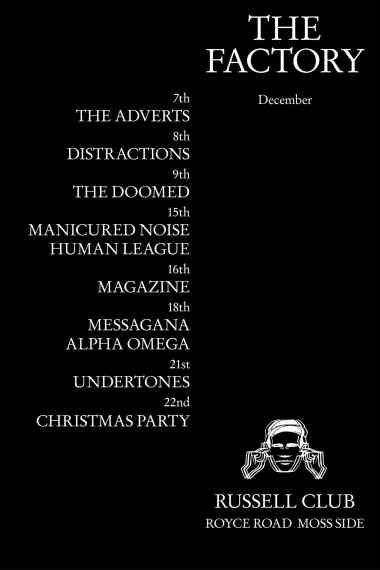 Continuing a rummage through the contents of the Use Hearing Protection box set.

This is another design by Peter Saville, which takes elements of his FAC1 and FAC 3 posters, to publicise all eight events that were scheduled for the Russell Club in December 1978.  As far as I’m aware, the poster was never readily available to the public, with a single run readied, printed, and used in its entirety, for fly-posting across the Greater Manchester area.

It’s interesting all these years later to realise that some of the bands booked to appear would enjoy more than a fair degree of commercial and critical success, while others disappeared seemingly without a trace.  I’ve dug out my deerstalker and magnifying glass to try and bring you some info:-

Distractions were a power-pop/punk band from Manchester whose debut EP, You’re Not Going Out Dressed Like That, was released on local label TJM Records, around the time they were billed to headline The Factory on 8 December 1978.  Here’s the lead track from said EP:-

mp3: Distractions – It Doesn’t Bother Me

Tony Wilson decided that Distractions would be a good addition to the Factory roster, and the follow-up single was released, in September 1979, as FAC12:-

Prior to the release of FAC12, the band signed to major label Island Records, with the first release being a re-recorded version of It Doesn’t Bother Me. A couple more singles and an album would follow, but to almost complete indifference from the general public, and the band called it a day in 1981.

The postscript is that Distractions would reform many years later, and there has been a steady diet of singles and albums since 2010.

With apologies if you already know the background to this one, but it wasn’t something I’d previously been aware of.

The Damned broke up in February 1978 only for most of them to get back together again later in the year – the only member not interested was Brian James.   Worried about any legal percussions of using the band name, Dave Vanian, Captain Sensible and Rat Scabies decided to play as The Doomed, supplementing themselves as required, including drafting in Lemmy from Motorhead for a London show in September 1978.  This Manchester appearance would have been one of the last shows as The Doomed as The Damned was back in use from January 1979 onwards.

It would appear that Messagana were a Manchester-based reggae band, but I’ve not been able to track down any recordings, and there’s nothing kicking around on Discogs.  They certainly seemed to be popular with the folk at Factory as the name would appear as a support act on some occasions, including October 1980 when they opened a show whose headliners were New Order and The Durutti Column.

I’ve drawn a blank in this instance.  It’s a name that’s been used by a number of bands, across all sorts of genres, over the years.  Discogs lists a few of them on its site, including an Australian jazz combo whose sole album was released in 1976, while there is currently a hard rock band, from Norwich, England, performing under that moniker.

Sadly, not the name of a band who were booked for The Factory Club, but an event at which I think, among others, Generation X made an appearance.

Now here’s the thing.  I’ve found an alternative poster to promote the events for The Factory at The Russell Club throughout December 1978.  I’m not sure if it pre-dated the Saville design or whether it was hastily put together once the Saville poster, in the time-held tradition of fly posting, had been obscured by others vying for attention. 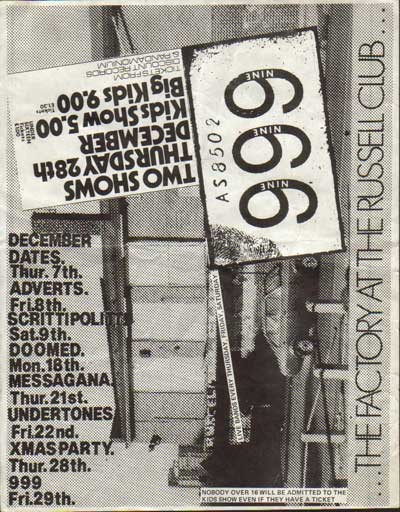 There are a number of reasons I think this might have been a later production.

First, and most obvious, is the fact that shows by 999 the week after the Christmas Party are mentioned.

Secondly, it can be seen that Scritti Politti are given a listing for the show on 8 December.  I’m assuming that Distractions, being a local band, had already served the purpose of selling tickets to those who watched them wherever and whenever, so the highlighting of a group from elsewhere, who were already being name checked in the music papers, seems to be a bit of additional marketing.

Thirdly, there’s no mention of the shows on 15th and 16th December, and given the headliners were Human League and Magazine, there’s every possibility the tickets had already sold out, so there’s no point in drawing attention to them.

Finally, given that Peter Saville wasn’t known for the speedy nature of his productions, it is likely that Wilson & co just arranged for something cheap, cheerful and typical of the design of its day to make a further push for ticket sales and never came to regard it as an official release for inclusion in the Factory catalogue.

I’m pleased to say that FAC5, when I get round to it, will be a much more straightforward piece.