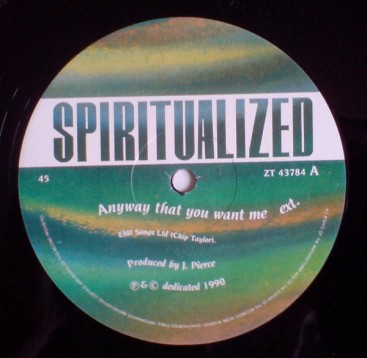 A GUEST POSTING BY FLIMFLAMFAN

I’d like to suggest Spiritualized’s version of Anyway That You Want Me 12” extended mix.

mp3: Spiritualized – Anyway That You Want Me (12″ extended mix)

I don’t know why a decision was made, if one was made at all, to combine Any and Way as one word for this version? Prior to this version, my absolute version was by The Troggs. On hearing this version, however, The Troggs were knocked swiftly to the number 2 spot.

mp3: The Troggs – Any Way That You Want Me

One of my abiding, happy memories of the song, circa 1990, is going to work on the bus – I worked nights at the time and was (and remain) a stickler for arriving on time. There I was at the back of the downstairs, 41 bus, volume to max on my Walkman (or derivative thereof), and lost to the bustling Friday night world outside. So lost was I to Anyway That You Want Me that I missed my stop – Cathedral Street at John Street – and only realising my misjudgment when the bus pulled in at its terminus at the Odeon cinema some 4 stops ahead.

Despite being able to recollect running like hell through the throng of Friday night revellers, back towards John Street, I can’t recall if I was late or not?

It’s a moment I think of fondly; lost in a space where only I and the music seemed to exist – if even for a short time – a feeling that I doubt I could describe without seeming like an absolute arse.

I’m guessing that others may have had similar experiences with other songs on other modes of transport?

5 thoughts on “THE MONDAY MORNING HI-QUALITY VINYL RIP : Part Nine : ANYWAY THAT YOU WANT ME”