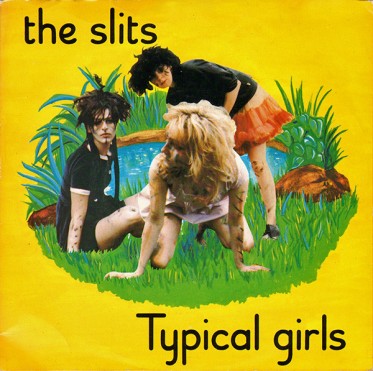 This debut single, from September 1979, now goes for fairly decent sums of money on the second-hand market, in the region of £30 upwards.  I’ll be very honest and admit that I’ve never owned a copy, nor for many years did I ever want to, for the simple reason that the 16-year-old me didn’t ‘get’ The Slits.  As I’ve grown older, and my musical tastes have developed/matured, I can now see it for the truly astonishing and ground-breaking effort it was, as nobody was making music like this back in the day.

I’ll use the booklet in the 4xCD boxset, Make More Noise : Women In Independent Music 1977-1987, which was issued by Cherry Red Records last year, to tell the backstory:-

Formed in London from the wreckage of The Flowers of Romance and The Castrators, The Slits brought together Ari Up, Palmolive, Viv Albertine and Tessa Pollitt and quickly found favour on the punk circuit, sharing a particular affinity with The Clash, with who they toured on several occasions.  Despite many fans feeling the group diluted their raw, energetic early sound in pursuit of success with their Dennis Bovell produced debut album ‘Cut’, the truth was the group simply began to expand their horizons at a rate difficult to follow.

Drawing from reggae, dub and world music, they pursued a chaotic path to early 1982, including a semi-bootleg album of demos and home recordings (risky stuff for major label artists at the time) and an attempt to recapture the band’s spirit on ‘Return Of The Giant Slits’ in 1981.  But the magic was gone by 1982 and the group disbanded, although occasional revivals and reunions peppered the 2000s until Ari Up’s unfortunate death in October 2010.

The above story doesn’t mention that Ari Up was just 14 years old when she formed The Slits in 1976, having grown up in a musical family, with both her parents involved in the industry in her home country of Germany.  Ari came with her mother Nora to live in England at a young age, and her mother would in the late 70s, become the girlfriend and eventually the wife of John Lydon.  Nor does it mention that Palmolive left the band at an early stage, being replaced on drums by Peter Clarke, aka Budgie, who would later be a long-standing member of Siouxsie & The Banshees.

All of which I’ve added just to show the various links that The Slits had to the punk/new wave pioneers, and I have long been annoyed with myself for taking so many years to appreciate what they did.

The b-side of the debut single was an audacious cover version, and if anything, it was hearing this and thinking it was an absolute monstrosity which put me off the band.

mp3: The Slits – I Heard It Through The Grapevine

And again, to be fully honest, while it has grown on me, I’m still not fully with it.