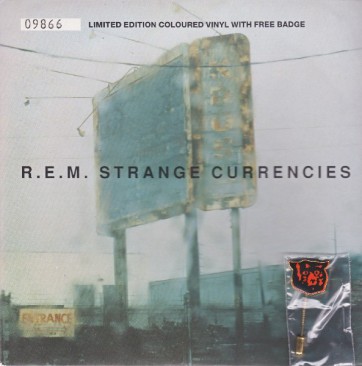 The more I listen to these songs from ‘Monster’, the more I love them. 26 years have passed since its release, but I don’t find myself tiring of them one little bit, unlike many of those on the preceding two R.E.M. records. This week’s track was the fourth single from ‘Monster’ and arguably the album’s most obvious single.

On first listen, you could be forgiven for thinking that Strange Currencies is essentially a re-working of Everybody Hurts. Indeed, it nearly didn’t make the cut for ‘Monster’ owing to its similarity to the former hit. But Stipe’s melody was deemed to be too good to eschew, so the rhythm section was redone. There are still obvious parallels – the 6/8 time signature, and Buck’s arpeggios, but if you listen hard enough, there’s a lot more going on here. There’s swathes of feedback floating in and out of the background, the guitars are dirtier, and of course, the emotion of the vocal and subject of the lyrics, couldn’t make this song more different than EH.

Here, Stipe sings of a longing for someone he simply cannot reconcile. His role is ambiguous – is his would-be paramour aware of his adoration, but unwilling to reciprocate? Or is there something more sinister afoot? There’s an air of desperation in his words, and his emotions seem to be getting the better of him. He’s pleading for a sign – “I need a chance, a second chance, a third chance, a fourth chance, a word, a signal, a nod, a little breath, just to fool myself, catch myself, to make it real”. It’s a beautiful line, one of Stipe’s best in my view. But… Peter Buck once explained the song is sung from the point of view of a stalker, which obviously puts a completely different spin on things. The opening line “I don’t know why you’re mean to me / When I call on the telephone” makes complete sense in that regard. In both cases though, it’s a song of (unhealthy?) obsession, and as such, it’s very much a Monster song, and nothing whatsoever like Everybody Hurts.

Musically, it actually sounds like a classic doo-wop or Motown ballad. Listen to the chorus – the syncopation between the vocal and the bass/drums, especially – and you can easily hear a group like the Temptations performing it. (By the way, I can’t take credit for that observation – I read it in a fan forum once, but it stuck with me because it surprised me how true it was.) I also love the bridge – so simple, but oh-so effective in lifting us to a near-crescendo before dropping us back to earth for the final verse.

There will always those who cannot hear beyond the Everybody Hurts comparisons. That’s fine. But to me, Strange Currencies is one of the band’s finest moments, a complex mix of beauty and ugliness, gentleness and brutality, subtlety and brazenness.

While Strange Currencies was played live at every show on the massive Monster Tour, it was then laid off until 2003 when it made occasional appearances. As a single though, it reached #9 in the UK charts, the band’s fourth Top Ten hit. It was released on three formats. The 7” was a numbered limited edition on rather lurid fluorescent green (almost yellow) vinyl and came packaged with a Monster bear-head tie pin-type badge. Along with the cassette, it included an instrumental version of the a-side.

The CD single continued the solar-powered concert for Greenpeace that the previous three singles started. I mentioned a couple of weeks ago that Drive was performed twice so that a good recording could be provided for a Greenpeace charity album. The version that opened the show was not put out as one of these b-sides, so what you’re hearing here is the second version, which is ever so slightly better. Both are radically different to the album version on ‘Automatic For The People’.

Funtime is, of course, the Iggy Pop/David Bowie song that R.E.M. originally recorded for the b-side of Get Up in the States. And Radio Free Europe needs nothing written about it, other than this is a terrific, loud version which closed the show with a bang! And, perhaps as expected, Stipe really cannot remember the words…

And here’s your bonus remix, probably the best of the entire Monster Remix project. This is utterly, utterly gorgeous. Yes, it’s very similar to the original, but my goodness, how the subtle differences transform it! The keyboard part in the final verse is brought closer to the foreground, and Stipe’s vocal is actually a different take than the one used for the original, and it floors me! Without a doubt, Monster [2019 Remix]’s finest moment…..