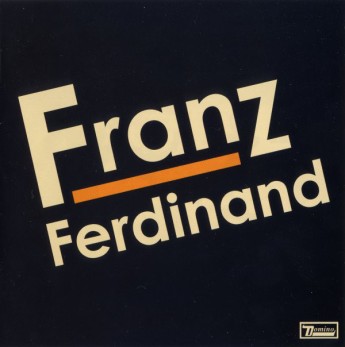 It’s the modest ones you’ve got to look out for. Franz Ferdinand‘s aim is to “make records that girls can dance to and to cut through postured crap”. Oh really? After all they sport art-school crops, stripey shirts and the moniker of the archduke whose assassination kick-started the First World War. In short, last time we checked they weren’t quite Jet. So Franz Ferdinand, then: Posturing? Yes. Crap? Well, we’ll get to that.

So they’re smart enough to play a little dumb. And certainly this debut fulfills their modest – but laudable – aim of making girls gyrate. Because, without doubt, this debut is an album packed with tunes that will make anyone with legs dance. At indie discos across the land their first two singles have been packing dancefloors. So, in essence, we have the band equivalent of the smart kid who shoplifts to get popular, who plays down their IQ to fit in.

And why not? There’s a great tradition of smart people at first confusing the world with the apparent simplicity of what they do: Iggy Pop, the Sex Pistols, even The Rolling Stones. Because, the single theme of British music of the last decade has remained constant: no one likes a smart-arse. We all have a giggle at the silly musicians pompously proclaiming their genius. Nothing makes us laugh as much as authors of rock operas, or Metallica‘s dabblings in classical music and, of course, everything that comes out of Brian Molko‘s mouth. Who wouldn’t want to avoid the trap of being seen to be clever-clever? After all, just look what happened to Blur.

But then, of course, it’s Oasis‘s fault that we find ourselves at this juncture. They beat Blur so comprehensively – so completely – that, to be in a band and be smart, to challenge assumptions, or go out on a limb became unthinkable. The amazing lineage of British art-school bands simply fizzled out: The Beatles, The Who, the Stones, Roxy Music, Sex Pistols, Wire, Blur and nothing. Since then, all the new big and important bands have been salt-of-the-earth types (Stereophonics) or sweeping romantics (Coldplay) and they dressed like neglected shelf-fillers.

Franz Ferdinand formed after meeting at Glasgow College of Art, signing in summer 2003 – so they’re settled into a noble and inescapable tradition. The problem is that, despite their self-effacing aims, their records are informed and driven by this tradition. This may be sad for them, but it’s great news for us. Because, however fantastically dancey or lose-yourself a track is, there remains at its core an intelligence that makes it as engaging for the brain as it is for the feet. From the guitar-dicing song arrangements to the cod-German anthemic end to ‘Darts Of Pleasure’, at the heart of Franz there’s an innate need to subvert those tunes and reject cliché.

As critics have noted even the crowd-pleasing top-three sounds they use owe themselves to the informed art-school political disco-assault of early ’80s post-punkers Gang Of Four and Josef K. But where the post-punkers’ caustic tunes were hemmed in by politics, ideology and sloganeering, Franz Ferdinand cloak themselves in love and ambiguity.

Ideas slide in and out of view as they refuse to get tied to anything. If there is one overriding theme it’s that of structure. They appear to have taken the tired grunge blueprint of quiet/loud/quiet/loud and breathed new life into it so that it becomes laconic/dance/laconic/dance.

For when they’re not dancing, they’re revelling in the detached passion of a voyeur. Alex Kapranos‘s attitudes are wrapped up in smudged passion. It’s arch, but revealing. (“I want this fantastic passion/We’ll have fantastic passion” he chimes charmingly in ‘Darts Of Pleasure’) – he’s a lothario with mean intent and knows exactly which buttons to press. But you half suspect that it’s another pose: if actually confronted with heaving passion he’d run a mile. How very British.

This teasing uncertainty lies at the heart of the album. ‘Michael’ may at first appear to be a frank exploration of homoeroticism (“Michael you’re dancing like a beautiful dance whore”) but really Alex is just playing at sexual roles in the same way Morrissey enjoyed 20 years ago.

Alex has two clear voices: a rich, warm, honeyed croon that he employs to devastating effect throughout the laconic sections and a more straight-ahead rock voice. It’s an unsettling effect – not quite Scott Walker playing vocal tag with a rock Bowie but not far off. It’s another example of the bountiful contradictions at the heart of Franz Ferdinand. Of course, on ‘Darts Of Pleasure’ the two voices almost meld as they battle for supremacy – it’s this struggle that makes the song so potent.

But Franz Ferdinand aren’t satisfied with just two voices though, indulging in the twisted absurdist yelp of ‘Tell Her Tonight’‘s verse, coupled with its mannered mid-section, and ‘Darts Of Pleasure’s cod-German energetic outro that’s designed to replicate the moment of orgasm. It’s preferable to screeching “Goal!”, but should your lover ever make the vinegar face and cry out “I’m super fantastic, I drink champagne and salmon” in any language it’s probably advisable to ditch them. Immediately.

What makes this all the more extraordinary is that ‘Take Me Out’ is a typical record executive’s idea of exactly what not to release as a single. It’s essentially two songs spot-welded together like one of those Robin Reliant/BMW conjunctions that Watchdog always gets so annoyed about. Sadly, the more cautious radio presenters have elected to play just the second half, missing that this is an inspired coupling that showcases all Franz Ferdinand’s strengths: staccato guitars, disco rhythms and arch lyrics.

A more pretentious writer would state that the moment the stuttering Strokesy guitars are replaced by the booty-shaking rhythm and disco guitar is the moment that the sun goes down on Julian Casablancas mob. Not me, though. But it’s an intriguing idea.

The two deviations from the messy subject of sex bookend the album. The opener, ‘Jacqueline’ is dazzling. Alex murmurs a tale of 17-year-old office girl exchanging glances, as a guitar hesitantly strums. It’s the most low-key opening of an album in recent memory, but suddenly the insistent bass intrudes, absurdly spiky guitars burst in, the focus pulls back and the remainder of the song is an advert for being on the dole. Alex sneers as though he hates work, but it’s an OK compromise. More importantly, it’s a compromise he’s chosen: “It’s always better on holiday/So much better on holiday/That’s why we only work when/We need the money”. Not quite a philosophy, but a pretty decent way of life.

Ironically the closer ’40 Ft’ with its veiled allusions to death is the song that look to the future. Its ominous references to blood congealing and 40 feet remaining seem transparent references to suicide. The band claim it’s more to do with flinging yourself into a difficult situation than off a railway bridge but its detached delivery and fractured elegance is creepy and mesmerising.

Rarely for a debut, there’s no crap – ‘Cheating On You’ is the closest to giving off the scent of ‘will-this-do?’ but only because its thrills are uncharacteristically one-dimensional. But there is still pleasure aplenty in the way they race through the pointed chorus (“Goodbye girl because it’s only love”) – as if the band member that finishes last is going to have to pick up the bar tab.

This album is the latest and most intoxicating example of the wonderful pushing its way up between the ugly slabs of Pop Idol, nu metal and Britons aping American bands. What these blossoming bands have in common is the absolute conviction that rock ‘n’ roll is more than a career option. They’re bringing an energy and inventiveness and a need to break the rules. From the Franz Ferdinand gigs at the warehouse The Chateau and their bootleg album through to The Libertines‘ constant guerrilla gigging and British Sea Power‘s onstage bear’n’branches antics new British music is exciting again. And although it’s early days there’s a huge bunch of new bands coming up giving two fingers to the man and making extraordinary music.

Emerging now are The ’80s Matchbox B-Line Disaster finally fulfilling their promise, The Duke Spirit whipping up dark pleasures, The Futureheads genetically-mutating rock and there’s a whole art rock scene based around the Angular Records compilation with Bloc Party and Art Brut leading the pack. Now is the greatest time for 25 years to form a band.

With Travis scraping into the charts at 48 while Franz Ferdinand breeze in nonchalantly at three with ‘Take Me Out’, it’s the biggest upheaval since Pulp turned heads when ‘Common People’ went to number two in 1995. It marks the dawning of an era of British music that isn’t just for the casual petrol shop consumer, but stuff so important that you can give yourself to it completely. This is the album that’s going kick open the door for all the great British bands that’ll sweep through in their wake.

And this is a great place to start. Despite what Franz Ferdinand say, this is an album as much about preening and posing as passion, that’ll have you poring over the lyrics for an age. The fear that they couldn’t match their first two singles has proved unfounded. They’ve done it. With style, wit and, well, great posture.

That’s an awful lot of pressure to place on an album, never mind a debut.  It’s easy to mock now given how wide of the remark the prediction was in that the re-ignition of the interest in art-school, indie-guitar music was temporary, with very few of the bands making it beyond two or three years.

Here’s the thing.  When I turn my mind to the best albums to come out of Scotland in my lifetime, I inevitably go back in time to the previous century with the new wave/post punk of The Skids and The Rezillos, the early stuff from Simple Minds, the Postcard bands, The Associates, Teenage Fanclub, Cocteau Twins, Primal Scream, Close Lobsters, JAMC and Arab Strap; the individual talents of Edwyn, Roddy, Paul H and Paul Q; or else I think of the more recent loves such as Frightened Rabbit, The Twilight Sad and my very soft spot for the genius who is Adam Stafford.  I never factor Franz Ferdinand into the equation which is a huge oversight, as every time I play that debut album, I’m reminded of how damn-near perfect it is with not a duff note from start to end.

Oh, and you can just about always rely on one of their songs to fill the floor at a Simply Thrilled night.

Many thanks for all the comments over the past couple of weeks….the requests to keep this sort of thing have been duly noted and I’ll try my best to make it more of a regular feature in the weeks and months ahead.

It’s back to normal as of tomorrow beginning, as usual on Sundays, with the R.E.M. series.