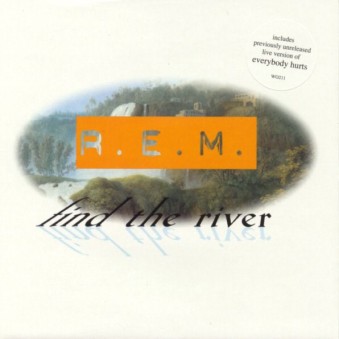 I remember back in either 1999 or 2000, when I was active on newsgroups (remember them?) the rec.music.rem group ran a readers poll of the best R.E.M. song. The winner was Find The River. I was a bit miffed. I never disliked Find The River, but it never struck me as being among the band’s very best work.

October 1993: a year after ‘Automatic For The People’ came out, Warners were still releasing singles from it. Find The River, the album’s closing track, was single number six. SIX! I used to balk at four singles being released off an album, but six? Talk about milking it. If I’m being honest, I don’t think Automatic has six singles on it. Maybe three, four at a real stretch. But never six.

What Find The River has going for it is its chorus, in particular the backing vocals. They are stunning, and probably the last great group vocal on an R.E.M. record. Well, until At My Most Beautiful any way. It was, apparently influenced by a much earlier song. “Harborcoat has got me and Michael and Bill all doing completely unrelated things, and yet it works together,” explained Mike Mills. “We tried it again on Find The River. I had the idea that Bill and I would go in and do some harmonies without listening to each other. It’s great because mine is this incredibly angst-ridden emotional thing, and Bill’s is this really low-key sort of ambling part. They’re two opposite ends of the spectrum but they’re both on there, and it’s a beautiful thing.”

He’s so right. Stipe’s lead is good, but he’s completely overshadowed by Mills and Berry, the former’s high vocal at the back, with the latter’s deeper voice nearer the front. That’s what makes Find The River for me, particularly from the second chorus on. It’s what makes Find The River one of Automatic’s better tracks, and a wonderful album closer. A single though? Hmm, still not convinced.

It’s clear the record-buying public weren’t convinced either. That or they’d just had enough of the record by then. It peaked at a lowly #54 in the UK, the band’s least successful single for more than four years. To be fair, there wasn’t much to entice fans to buy it. The 7” and cassette featured a live version of Everybody Hurts recorded just the month before the single’s release at the 1993 MTV Awards. It’s actually a more than decent performance which features a French Horn. But for some reason, it fades out. I have no idea why. So we don’t even get the full track!

The only other format was a CD single which added, for some bizarre reason, an instrumental version of Orange Crush.

As good a song as Find The River is, it was a completely unnecessary single. No one wanted it, it certainly wasn’t needed to promote the album, and there was nothing on it to sell it to anyone but the most hardcore fans. It signaled the end of the Automatic For The People Era. The next time we heard from R.E.M. they’d taken an altogether different path, but a not unwelcome one.