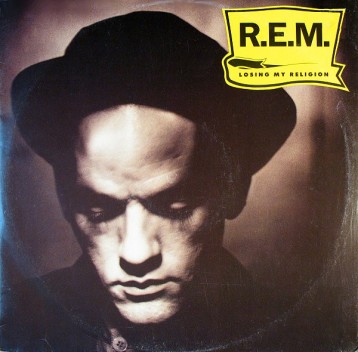 It’s Monday, February 19th 1991. Your humble scribe is working for Our Price, at the time the UK’s biggest record store chain. In among the boxes of new releases that day is one particular offering I’d been waiting very eagerly for – R.E.M.’s new single Losing My Religion. I can’t remember if I or someone else unpacked the boxes that day, but I know I had made sure that one copy of each format had been put aside. I so desperately wanted to play it, but R.E.M. were still considered a cult band and not suitable for a busy Monday of new releases, despite most of my colleagues and managers also being fans.

At one point later in the day, I managed to commandeer the CD player and headphones. I squat down behind the counter and played Losing my Religion for the first time. And as I listened, all that enthusiasm drained slowly away. What the hell was this? I mean, I was aware the band was making a more acoustic record akin to the mandolin-led numbers on ‘Green’, but I at least expected a chorus! Didn’t stop me from buying it though. On all formats.

I played it to death hoping I would warm to it, and I did. But I still didn’t think it would be a hit. I was never one of those fans who didn’t want his favourite band to be successful so I had to share them with other people. No, I wanted R.E.M. to be huge, so I could point at all the others who thought I listened to “weird stuff” and tell them I was right all along! But if R.E.M. were going to be megastars, this wouldn’t be the song to catapult them to that status. I wasn’t the only one to think that.

The band’s label, Warner Bros., was wary about the group’s choice of the song as the album’s first single. Steven Baker (no relation!), vice president of product management at the time, said there were “long, drawn-out discussions” about releasing such an “unconventional track” as the single until the label agreed. The marketing department had similar concerns as did radio programmers. To this day, it’s a mystery how Losing My Religion became the global behemoth that it did.

It started out in life as Peter Buck teaching himself to play mandolin while watching TV. When he listened back to the tapes he made of his attempts “there was a bunch of stuff that was really just me learning how to play mandolin, and then there’s what became ‘Losing My Religion’, and then a whole bunch more of me learning to play the mandolin.” Despite “trying to get away from [writing typical R.E.M] kind of songs”, Buck admitted it was “probably the most typical R.E.M.-sounding song” on the new album. “The verses are the kinds of things R.E.M. uses a lot, going from one minor to another, kind [of] like those Driver 8 chords. You can’t really say anything bad about E minor, A minor, D, and G – I mean, they’re just good chords.”

The original studio take was just Buck, Mills and Berry. Mike Mills found it hard to write a bass line for the song without it sounding derivative, so what was used was apparently influenced by John McVie of Fleetwood Mac. The band felt the song sounded “hollow”, with the high range of Buck’s mandolin set against Mills’ low-end bass. To give it some mid-range, they drafted in former dBs guitarist/vocalist Peter Holsapple to play acoustic guitar. Holsapple remained as an unofficial “fifth member” of the band throughout the recording of the album and subsequent promotional live appearances. Michael Stipe recorded his vocal in a single take, which is quite remarkable when you listen to it.

Losing My Religion became R.E.M.’s biggest hit around the world. In the UK, it only reached #19, but unusually held that position for three straight weeks. The song’s popularity grew the longer it hung around, and years later is one of R.E.M.’s most recognisable songs, probably because of the slew of different live versions that have cropped up on numerous R.E.M. releases ever since. If you’d said that to a 19-year-old Robster squatting behind the Our Price counter he’d have sneered with contempt at such a ridiculous notion!

So, those formats I referred to? Well, the 7”, 12” and standard CD single all included a track entitled Rotary 11, a reference to an old b-side Rotary 10. Like its predecessor, it’s not really worth the effort, being just a daft jazz-tinged instrumental with a surf guitar lead. Of more interest was the extra track on the 12” and CD single, a live version of a Velvet Underground song. Now R.E.M. like the Velvets, as previous renditions of Femme Fatale, There She Goes Again and Pale Blue Eyes demonstrated. After Hours was a song penned by Lou Reed and sung by both Reed and drummer Mo Tucker. R.E.M.’s live version was recorded during the Green Tour in 1989 and first featured on the very highly acclaimed concert movie ‘Tourfilm’. It omits the part of the song Reed sang in the original to keep it short and sweet.

Also released in the UK was a second CD single, labelled “Collector’s Edition”, in order to make sure people who bought any of the other formats also bought this one, especially as it didn’t hit the shelves until the week after the others! That’s music marketing in the 90s for you.

This CD contained another three songs from the ‘Tourfilm’ soundtrack, namely Stand, Turn You Inside-Out and World Leader Pretend. The originals, of course, all featured on R.E.M.’s previous album ‘Green’, their only other record released by Warner Bros., and clearly aimed to get new fans to buy that one as well!

One final note – Wikipedia lists a second “Collector’s Edition” CD single in the UK, which carried the tagline “Song Of The Year”. However, this was not an official release in the UK, but became available as an import from Europe. Along with the a-side and the 7” b-side, it also contained two other tracks that were released as b-sides in the UK on subsequent singles, so we’ll save them for later.

And one final note – I’m sick to bloody death of Losing My Religion now. I can barely listen to it anymore without wanting to turn it off. A shame, but a symptom of being an uber-fan I think.

*JC adds.…..the mp3 provided for World Leader Pretend is not identical as that on the Losing My Religion CD single.  Instead, it’s an extended version which includes the longer introduction where, after the cheering from the previous song has finally died down, Michael Stipe uses a drumstick to hit the side of a chair and recites a few lines from We Live As We Dream, Alone by Gang of Four before the band burst into their own song.  It’s an exceptional performance of what is surely THE stand-out song from Green.