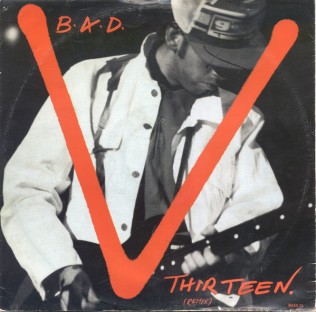 I’ve not really posted much on Big Audio Dynamite over the years on the basis that I’m more an admirer than a fan. There has been the occasional song that I’ve had a soft spot for, with one of my favourites being found on No.10 Upping Street. This was the album released in 1987 that, pre-release, caused much excitement with the news that Joe Strummer and Mick Jones had reunited to pen some songs and were co-producing the new record. I was a tad disappointed with the results, probably as my expectations were far too high, especially for the tunes that had Strummer’s name in the credits, and as it turned out, the song which stayed with me most was the work of Mick Jones and Don Letts:-

The lockdown period, combined with my retiral from work, led to me going into the storage box which is packed with cassettes, many of them specially compiled by Jacques the Kipper (and there’s a two-part series around that early next week), during which I came across a C90 with writing that I didn’t recognise and a bundle of songs from singers/bands that I’d normally go on a 20-miles cross country run in the snow to avoid. It’s then I remembered it was the work of a bloke called Tim, the on-off boyfriend of one of my flatmates, Wendy, and he’d given me the tape specifically as I had freaked over one track.

Incidentally, I’ll digress briefly for a second to say a little bit more about Wendy. She was Canadian and a stunning looking girl who worked as an air stewardess for KLM on the daily run between Edinburgh and Amsterdam. She was also, as my brother SC can testify, an absolute psycho and nutjob who once pulled a knife on him on the grounds that the flirting she had been encouraging was now boring her. I haven’t seen or heard from Wendy since 1987 when the lease for the flat came to an end and we all went our separate ways.

The tape had a remix of the BAD song that I was fond of and just the other week I tracked down the 12″ single on which it had been put on the b-side:-

I’ve always felt there was a hint of New Order to the tune, but this mix with around two extra minutes of music and lots more instrumentation really demonstrates where I was coming from.

I was delighted to find a further, even longer and even funkier version on the single that got me thinking of Confusion:-

And, for completeness sake, here’s the A-side, itself a very extended remix, almost ten minutes long, of the opening track on Side 2 of the parent album:-

Not a bad way to kick start the week, even if I say so myself (which would have been the case if I hadn’t held this post back by 48 hours to muse over the name of a Primal Scream EP!!)