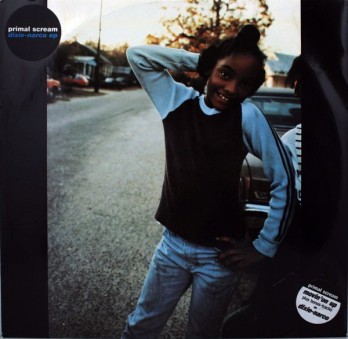 The Dixie-Narco EP is an extended play by the British band Primal Scream, released in February 1992 on Creation Records. Recorded at Ardent Studios in Memphis, this was the only official Primal Scream release to contain the song “Screamadelica”, which was not used on their Screamadelica album. The song later appeared on the 20th anniversary edition of Screamadelica and on Shoot Speed – More Dirty Hits.

An interesting thing to note is that the link on the wiki page to an All Music review of the EP now just takes you to something that is no longer there. I’m thinking it may have been quietly removed on the back of this news story:-

The Dixie Chicks Change Their Name, Dropping the ‘Dixie’

The Dixie Chicks are now the Chicks.

The platinum-selling country trio, which in 2003 became pariahs in Nashville for criticizing President George W. Bush on the eve of the American-led invasion of Iraq, has changed its name, apparently in tacit acknowledgment of criticism over its use of the word “Dixie,” a nostalgic nickname for the Civil War-era South.

The group made the change stealthily on Thursday, releasing a new video as the Chicks and adjusting its social media presence. Representatives for the band confirmed the new name.

In a brief statement on its new website, the band states simply: “We want to meet this moment.” The new video, “March March,” features images of current and historical protests — for women’s rights, gay rights, environmental causes and Black Lives Matter.

For the Dixie Chicks, the pressure had come over its use of the word Dixie, with commentary in the news media pushing the group to change its name just as the country debates issues like removing Confederate monuments.

The name change comes ahead of the release of the group’s first album in 14 years, “Gaslighter,” due out on July 17.

Bobby Gillespie‘s political views are well-known, and there is no question that if the EP in question was being issued today, it would not carry that particular title. More likely that it would adopt the name of its lead track, Movin’ On Up, or perhaps the name of one of its three other songs, but most likely not Screamadelica as that would only cause confusion.

The EP is long out of print, certainly on vinyl, with decent quality copies going for £10 and upwards on Discogs. I’d be surprised if there’s all that many CD versions lying around in shops or stores. The other piece of good news is that the tunes on the EP don’t appear to be available on a stand-alone basis, but can be found as part of the 20th Anniversary expanded edition of the Screamadelica album.

These are from the vinyl. I’ve already renamed the EP within my i-tunes library:-

For anyone not familiar with the release, it’s worth mentioning that Screamadelica, coming in at almost 11 glorious minutes in length, takes up one side of the vinyl, with the remaining tracks on the flip side.

Carry Me Home is a song penned by Dennis Wilson, intended for inclusion on The Beach Boys album, Holland, released in 1973 but it never made the cut.  To the best of my knowledge, it has never had a formal or authorised release on any Beach Boys record.