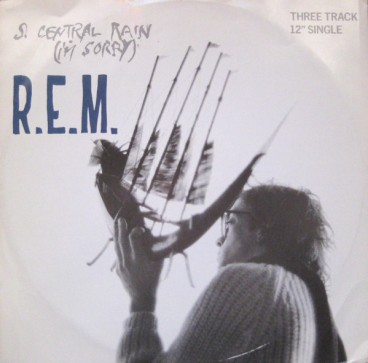 Since coming back to vinyl, inspired by taking up this blogging nonsense back in 2006, I’ve picked up some second-hand early singles by R.E.M., all for nothing more than £1 or £2 as that was back in the days when folk were still looking to clear homes of what they regarded as useless junk. Besides, all the tracks, including b-sides could be found on compilation CDs as IRS did everything they could think of to cash in on the world-wide fame that had come in the early 9os with the albums on Warner Bros.

The band’s third UK 45, from March 1984, is my oldest single. It’s the lead-off from the sophomore album, Reckoning, which was released the following month (not that I was paying attention at the time – I was obsessed with The Smiths)

A song so timeless and enduring that the band was performing it as part of the live sets until almost the very end. It’s hard to imagine, but the very distinctive and memorable opening few notes were only added at a very late stage in the recording process. The band knew they had a classic on their hands but as Peter Buck would later explain:-

“[Producers] Mitch Easter and Don Dixon had the idea that the intro was weak — which it was. They came in early one day, and Don took a little guitar hook out of the chorus and stuck it on the front of the song. In those days, you physically had to cut the tapes up and splice them back into a new position, so it wasn’t quite as simple as it is now. When we came in, they played it to us, and we went, ‘Wow! That’s great!’ ”

It’s a song whose title doesn’t appear in the lyric, and this the reason why the sleeve advised that the name of the track was So.Central Rain (I’m Sorry), just in case any unassuming would-be purchaser wasn’t entirely sure of what they were trying to track down.

The 7″ and 12″ releases came with different b-sides, and again there was a reliance on cover versions:

The former is a short, 90-second long instrumental, aside from a couple of spoken/sung lines and yelps from Michael Stipe that leads immediately into a country-band style cover of the Roger Miller classic that seems to be been captured live in the studio, possibly from a jam. Worth mentioning that the 7″ refers to it as being just the one song:- 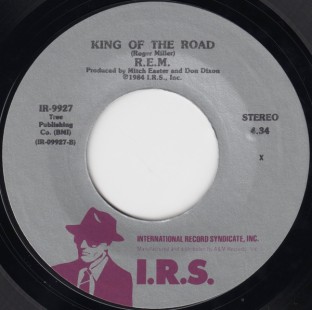 Voice of Harold features the same tune as 7 Chinese Bros., the second track on Reckoning. I’m not sure if it is an earlier effort with the tune or it was just the band having a bit of fun in the studio as the lyric on the b-side is Stipe simply reading out, in time with the tune, the notes that appear on the back of The Joy Of Knowing Jesus by The Revelaires, a gospel album that happened to be in the studio in Charlotte, North Carolina.

The second track is another Velvet Underground cover, not quite as shambolic as There She Goes Again, but again, it’s nothing all that special.