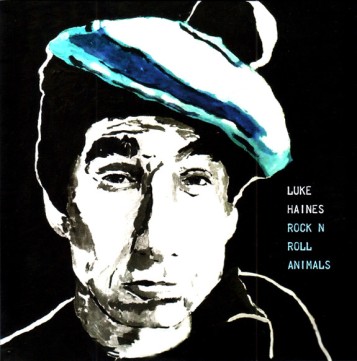 The overwhelmingly favourable reaction to Bad Vibes had re-awakened an interest in Luke Haines, a situation that was maintained the second art of his memoirs, when Post Everything : Outsider Rock and Roll, was published two and a half years later in July 2011.

It just so happened that the new book came out as Haines embarked on his next music venture, collaborating with Cathal Coughlan (of Microdisney and Fatima Mansions fame) and journalist/author Andrew Mueller to form the North Sea Scrolls, initially as a live performance show at the Edinburgh Festival Fringe, before the trio hit the studios the following year to record an album. Rather than include that project within this series, I’ll have a look at it separately in a few weeks time as it does merit a posting on its own.

Haines had been without any record deal of any meaning for a number of years, but 2013  saw him sign up with long-running London based indie-label Cherry Red, with whom he remains to this day. It seems to work quite well for both parties, with the label content to have someone of the stature and legendary status on their books, well aware he will provide good copy and offer the opportunity for more than the music press to feature any releases – the London broadsheets have long had a thing for Luke Haines, offering reviews of his new albums and live shows, giving him the same sort of profile and treatment as they do to the many visual, performing and installation artists based across the capital.

As for Haines, he has a home that allows him to indulge himself with the sort of projects that he seems most happy with, writing and recording concept/narrative albums on all sorts of subject matters, some of which are so left-of-centre that they make his wrestling effort from 2011 appear positively mainstream.

There have been six such releases on Cherry Red, and I’m going to feature them in three parts, before bringing this mini-series to a close.

The Cherry Red era kicked off with Rock and Roll Animals, described as a concept album that follows a narrative story about musicians represented as animals, with the main characters being a cat called Gene Vincent, a badger called Nick Lowe and a fox called Jimmy Pursey.

As with 9 ½ Meditations, there is a combination of songs and spoken word on offer, with the narrative duties undertaken by the actress Julia Davis. As with all Luke Haines records, there are potshots at those who annoy him and some of his wrath in this instance it aimed at the sculptor Antony Gormley, whose Angel of the North has long been lauded as transforming the perception of the Tyneside area of England (a view with which Haines takes great umbrage). It’s another surreal piece of work, one which has some great moments among others which are best forgotten. It didn’t quite work as well as the wrestling album, but against that, there was a single lifted from the album along with two new songs offered up on the b-side:-

Two year later, and another concept album, New York City in the ‘70s, hit the streets.

Cherry Red describe it as ‘a mythic re-imagining of the New York Rock n Roll scene 1972 – 1979’. It certainly was easier a concept to grasp than songs about wrestlers or rock stars as animals. There are numerous name checks and shout-outs to the people, the and the landmarks of the era. I’ve written in the past on this blog about my late teens/early 20s desire to visit NYC on the basis of what I was reading in music papers and hearing on the radio – Haines brings those desires to life via this album and for that alone I can’t find much fault with it. It is great fun to listen to, and as ever when I feel my feeble words can do something no justice, I will rely on those of someone who earns a living from writing astutely and critically about culture.

There are nods to a number of artists and creative figures from the period throughout its 34-minute running time, with opener Alan Vega Says a delightful introduction to what Haines is attempting to achieve – naming the vocalist of American electronic duo Suicide.

“Alan Vega says it’s going to be a great big hit/ if Alan Vega says so, then it probably is,” Haines whispers with a sense of playfulness, over searching synths and an irresistible guitar melody. This playfulness is irrevocably tied to the album throughout, with title track NY In The ‘70s another example of his brilliantly tongue-in-cheek lyrics. “Everybody’s gay or bisexual/ a man called Jim getting experimental,” he sings, as fuzzy synths almost drown out a lackadaisical guitar hook.

As well as evoking the names of famous figures from New York during the ‘70s, another significant theme central to Haines’ latest LP is his use of repetition. It is something that crops up time and time again and while it is largely successful, there are occasions where it becomes a bit much. Jim Carroll and Tricks N Kicks N Drugs are two examples of where Haines gets the balance right, with punchy, repetitive guitar hooks providing the perfect backing.

The same cannot be said for the song titled after the legendary lead singer of The Velvet Underground, Lou Reed, which does not quite reach the same level. As genius as Lou Reed unquestionably was, hearing his name repeated again and again and again is not nearly as appealing as it sounds. UK Punk is also a miss, with Haines repeating the song’s title over excruciatingly grinding synths, while the psychedelic Bills Bunker does not quite capture the imagination like the rest of the album.

Yet when Haines does get it right, New York In The ‘70s is a brilliantly witty and intoxicating listen. Doll’s Forever is an almost euphoric tribute to New York Dolls frontman David Johansen, before the infectious New York City Breakdown delivers another example of Haines’ brilliant lyricism. Then there’s the epic album highlight Cerne Abbas Man – yes, named after the ancient naked figure sculpted into the chalk hillside in Dorset – which sees Haines repeatedly chant “Mythic motherfuckin’ rock and roll”.

It would have been a suitable closer on its own – especially as it essentially sums up the record – but that honour is instead given to the dreamy NY Stars, which brings everything full circle by revisiting Alan Vega Says. Ultimately, Haines has once again succeeded in producing a surreal, engaging and magnificently wry collection of songs that provide a satisfying conclusion to his concept trilogy. As endings to trilogies go, New York In The ‘70s is definitely more Toy Story 3 than The Godfather Part Three.

One of the tracks that didn’t find favour with Mr Baber was released as a single, with a b-side that wasn’t previously available:-

3 thoughts on “THE SINGULAR ADVENTURES OF LUKE HAINES (21)”