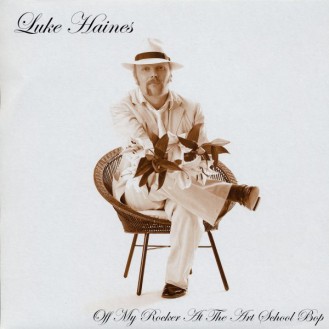 I bet some of you had thought I’d forgotten all about this series.  Apologies for the unexpectedly long delay since Part 15, but I wanted to make sure none of the postings got lost in the festive stuff and the Steve dropped in his wonderful review of Rockaway Beach that just couldn’t be held back.

The Guardian, in December 2006, carried a superb appreciation of Luke Haines, penned by the always-readable Alexis Petridis. The article looked back with a bit of nostalgia to the days of the Auteurs and Black Box Recorder, but in the main was rightly full of praise for a solo album released in October 2006 as I will now aim to demonstrate via a lengthy extract:-

Luke Haines is such an extravagantly talented songwriter, both unique and, one suspects, uniquely unsuited to mainstream success. It’s a fact underlined by the title track and lead single from his 11th album: for Off My Rocker at the Art School Bop, Haines called upon the services of sometime Sugababes and Rachel Stevens producer Richard X, then put him to work remixing a song that references transgressive performance artists the Viennese Aktionists, the 1914 Vorticist art journal Blast, Hungarian photographer Laszlo Moholy-Nagy and Nazi anthem The Horst Wessel Song. Despite the producer’s ministrations, the charts remained mysteriously un-busted.

It sets the tone for the rest of the album, which manages to be both accessible and deeply unsettling, matching crunching glam-rock guitar riffs and huge choruses to subject matter most songwriters would steer well clear of. The Walton Hop makes blackly comic capital from the topic of the teenage disco frequented by convicted child sex offenders including Jonathan King.

Pop-related paedophilia crops up again on the closing Bad Reputation, which retells the story of Gary Glitter’s downfall from the perspective of a member of his backing group, aghast at the effect The Leader’s sexual proclivities are having on his own standing. It offers perhaps the most improbable singalong chorus of the year: “Gary Glitter – he’s a dirty old man, ruining the reputation of the Glitter Band.” Leeds United is both naggingly catchy and about the Yorkshire Ripper murders. In the same way that the topics explored on Haines’ remarkable terrorism-obsessed 1996 album Baader Meinhof suddenly seemed far less esoteric five years after its release, it makes for pretty queasy listening in light of current events: “In the House of Lords, the Chamber of Horrors at Madam Tussauds, out with the old, we’ve got to make room for them all.”

Occasionally, Haines’ desire to provoke verges on the suicidal. That Off My Rocker at the Art School Bop was released to a response muted even by Haines’ standards may have less to do with its quality than with the presence of Heritage Rock, a viciously funny satire apparently aimed at the handful of magazines that usually champion him. Then again, one of the artists lovingly alluded to on the title track is Wyndham Lewis, the brilliant painter and sculptor whose belligerence effectively scuppered his own career, leaving him, as one contemporary put it, a “lonely old volcano”.

It’s a description that fits Luke Haines pretty well, but as Off My Rocker proves, when he erupts, it’s still pretty spectacular.

Off My Rocker At The Art School Bop is a tremendous listen, as good as anything he had ever released previously. It was an audacious and ambitious piece of work, full of humour, pathos and great tunes laced with knowing and cynical lyrics, as alluded to in the Petridis piece quoted above.

Should have been a huge hit…..tailor made for daytime radio!

The following year, another track was lifted from the album, to which three new songs and a live rendition of the title track were added to make a new EP, released only on CD, but given that the subject matter was a mass murderer and the failure of the police to track him down for years, it can be no real surprise that it was largely ignored by the media and received little, if any, airplay:-

I can’t let this week’s posting go without giving space to the dig at the man born as Paul Gadd, whose loud, anthemic and stomping glam-pop music of the 70s was a staging post for many a young boy and young girl on the road to them becoming post-punk/new wave/indie devotees:-

As a great philosopher once wrote – naughty, naughty, very naughty. But absolute genius.