A GUEST POSTING by JONNY THE FRIENDLY LAWYER

JC recently re-posted a brilliant story by Tim Badger about ‘Bob’, his beloved “old, battered, baggy and black” sweater (jumper?) which he named after the Cure‘s frontman. Badger loved it, danced to the Pixies in it, tried to impress girls with it. He recounted the rowdy night when he lost Bob, panicked and joyfully reunited with him the next day. The beloved jumper and the mention of the Pixies reminded me of a somewhat similar story of my own, which I offer up in fond tribute to Mr. Badger.

When Sam the friendly artist was a kid our favorite father-son pastime was going to see shows. One of the most memorable of the 100+ shows we saw was The Pixies at the Greek Theater in LA on [*checks master list*] 22 September 2004. It wasn’t the greatest show, to be honest, but they did play a great new song: “Bam Thwok” sung by the unsinkable Kim Deal. But the night was noteworthy for two particular reasons: First, unbeknownst to us, a writer for the LA Weekly noticed STFA and me buying a t-shirt and made it the basis of his review of the show. Came out like this:

I still get some smirks in the house for having been described as “visibly hip,” but I didn’t care at the time because I was chuffed to be seen as “late 30’s” when in fact I was 41. The second and more important reason was the shirt STFA went home with: 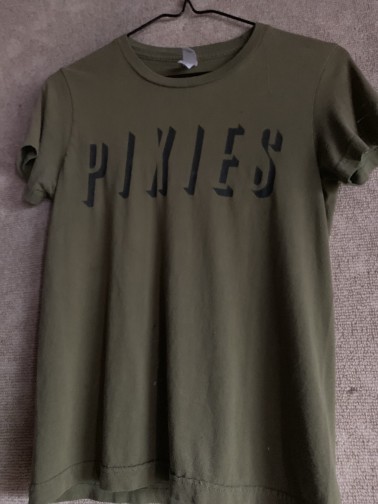 Sam wore that shirt EVERYWHERE. And he was wearing it 10 months later when we drove down to San Diego for a giant festival called Street Scene 2005. Headliners were The White Stripes, The Killers, Black Eyed Peas and Garbage, featuring my old dinner date Shirley Manson. Sam had a great time–sunny day, fab music, and there were loads of radio stations giving away free merch. Sam won a t-shirt from Indie 103.1 FM, the first station to host Jonesy’s Jukebox with the Sex Pistols’ Steve Jones. He cranked the Pixies shirt through a belt loop and secured it with a handful of key chains also given away as freebies.

By this time 11-year-old STFA was a concert veteran, having seen [*checks master list again*] 35 shows. He liked to see the big names but what he’d really been looking forward to was crowd surfing. I figured of all the acts that day the most rambunctious was likely to be Flogging Molly. I promised Sam that if it looked like a tight enough crowd he could give it a go. I was a bit alarmed to note that, just 2 songs in, the mosh pit in front of the Celtic punks was already head deep and swirling like a hurricane. But a promise is a promise and, after making Sam swear to never tell his mom, my buddy Mark and I hoisted him up and threw him on top of the mob. I watched him surf over the top for a good 10 seconds or so, and then down he went into the thrashing horde.

I knew I’d never be able find a 4-foot-tall kid in the crowd so we had prearranged to meet at the base of the nearest light tower. Sam dutifully turned up and I was overjoyed to see that he was all in one piece. I thought he’d be jubilant but he was disconsolate. “Dad,” he sniffed, “the Pixies shirt!” It and the belt loop were torn off in the pit. Mark and I looked over at the frantic army that was now positively boiling in front of the stage. I looked at Sam and sighed. Mark looked at me and said, “No fucking way.” But I’m a dedicated and visibly hip dad. I took a deep breath and went in.

I immediately gave up any chance of finding the Pixies shirt by seeing it–it was all I could do to remain upright. I crouched in low with my fists up around my head boxer-style, trying to make a way through the mix. Flogging Molly draws a good crowd at clubs, but this was an outdoor festival in the parking surrounds of Qualcomm Stadium, where the Padres and Chargers played. The mosh pit had hundreds of people in it and I think I took an elbow from every one of them. I couldn’t see anything. I was getting fairly well beaten up. The pit was unusually rough–we were 6 hours into an all-day event and the crowd had been drinking in the hot California sun since the gates opened. I was thinking about an exit strategy when I stepped on something soft. I moved it around with my foot and felt…what? a bottle cap? No! it had to be one of the key rings Sam had tried to secure the shirt with! I swooped down and grabbed it, sodden and stomped flat, still attached to the torn off belt loop by the key ring. I bowled my way back out, knocking over a few people in the process. That seemed fair in light of the beat-down I’d just taken.

Sam was delighted, Mark was incredulous, I was old, battered, baggy and bruised.

When Sam grew out of it the Pixies shirt went up on the wall of our music room. If I remember correctly the next beloved shirt featured the Meat Puppets.

JC adds….I awoke last Saturday morning to find this in my inbox.  About an hour later, I got a further e-mail fully confirming the date and time for tickets for a football match next month over in Barcelona, a match that will be part of a weekend in the city where myself and Rachel (Mrs Villain) will be hooking up Jonny and Goldie the friendly therapist (Mrs JTFL and mother of STFA) as they embark on a short holiday in Spain.  It felt like instant karma.

6 thoughts on “THE PIXIES SHIRT”