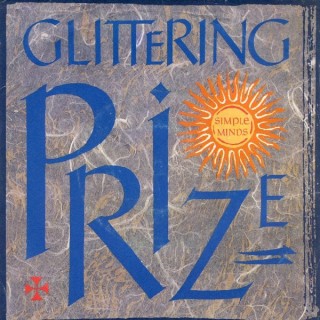 Some six weeks after Promised You A Miracle took its leave of the charts, the follow-up single was released:-

Where I’d been a bit iffy about Promised You A Miracle, I pounced on Glittering Prize, telling anyone who cared to listen, that it was a magnificent piece of music whose shimmering majesty, particularly via its Associates-like guitar, bass and keyboard sounds, was the perfect soundtrack to the final few days of what had been the first long summer of my university years….I was happy and this song made me even happier.  I was certain it would be a massive hit, but it was very much a slow-burner, taking what seemed like ages to make its way into the Top 20 and only doing so at the same time as the LP New Gold Dream (81,82,83,84) hit the shops.

Looking back, the lack of b-sides for Glittering Prize didn’t help, with just instrumental versions of different lengths appearing on the 7” and 12” releases, with no new tracks or old live recordings to flesh things out:-

The new album went straight into the Top 10 on its release and a week later was Top 3 (the new Dire Straits album, , Love Over Gold, went straight in at #1 when New Gold Dream hit its peak).

Virgin Records were desperate to issue a third single from the album but had to hold off until Glittering Prize stopped selling and dropped out of the charts which it did in early November. Just two weeks later, the new single came in at #36, 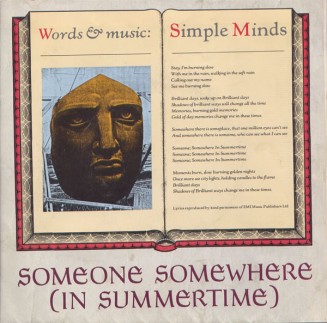 but to the shock and surprise of all concerned, that’s as high as it got:-

By general consensus, this was the highlight of the album and of the live shows the band were now playing to packed audiences. The 12” version even included a new extended introduction, one which Charlie Burchill had worked up during the live renditions and in doing so turned the song into a six-minute epic (and, although nobody knew it yet, gave an indication of what was about to come round the corner…..hiya U2!!)

Fans, however, seemed content with the fact they had bought the album, and perhaps it also suffered from the fact that many were also investing in what was by now an extensive back catalogue.

The band didn’t have much in the way of any new music for the b-side and so, for the 7” it was decided to offer up an early version of another track from New Gold Dream:-

mp3 : Simple Minds – King Is White and In The Crowd (session version)

This had been recorded back in February 1982 and broadcast on the Radio 1 evening show, hosted by David ‘Kid’ Jensen. It’s quite demo like, certainly in comparison to what was issued six months later on the album, providing evidence of the role that producer Pete Walsh had played in the studio.

The 12” did have a previously unreleased track:-

It later transpired that the music had been worked on for what had hoped would be the tenth track on New Gold Dream but had been abandoned as the band hadn’t been able to do quite get what they were looking for. In effect, what you have, is an unfinished demo……………..

New Gold Dream was placed high in just about every list typed up by the critics in their consideration of the best records of 1982. Simple Minds were now, at long last, a household name, and had even solved their drummer conundrum by keeping session player Mel Gaynor for the live shows and offering him a permanent position for going back into the studio for the follow-up.