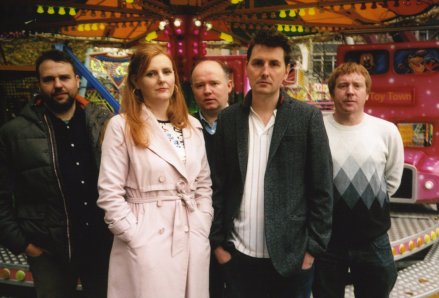 From the website of Fika Recordings on which today’s featured band, in 2017, released their first new album in a decade:-

Formed in 2005, The Just Joans have evolved from a shambling two-piece to an accomplished sextet that embrace rivalry and relationship in the vocals of siblings David and Katie Pope.

Once described as ‘the missing link between The Magnetic Fields and The Proclaimers’, the band have used self-awareness and self-deprecation to explore themes of angst, heartbreak and detachment.

From their 2006 debut album Last Tango in Motherwell through a series of successful EPs, to 2012’s compilation Buckfast Bottles In The Rain, the acerbic wit in David Pope’s observational lyrics have helped make the band a firm favourite of the indie-pop scene. Their rise has seen them play a plethora of international festivals, such as Wales Goes Pop, Indiefjords, NYC Popfest, and of course the Indietracks festival, of which they have been long-standing cult favourites since their first appearance in 2008.

Doog Cameron (pictured on the right edge of the above photo) actually works in the same office as me.  He’s had to, as a result of him becoming a dad to two young kids in the past few years, take time away from the band. His place has been taken by multi-instrumentalist, Arion Xenos who contributed to this 45 that was released in 2018 and whose work will be heard on an album that is due for release later this year:-

mp3 : The Just Joans – Has Anybody Seen My Boy?

David Pope described the 45 as an attempt at writing a lost 60’s girl group track…if that girl group been from Motherwell.

The b-side, he said, was a direct message to the friends who swanned off to art school and came back 3 months later with dyed hair, a Polaroid camera and a snooty attitude.

mp3 : The Just Joans – Who Does Susan Think She Is?

Two tracks that perfectly sum up what The Just Joans are all about.