A GUEST POSTING by STRANGEWAYS 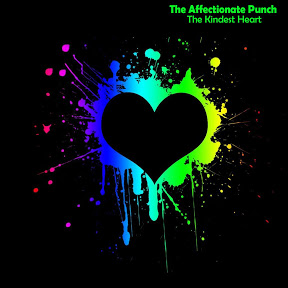 So DIY in spirit that their songs should be sold by B&Q, The Affectionate Punch have been releasing music online since November 2018.

This is a Glasgow-based ‘thing’ – yes, they’re a band, but no, they don’t tour – and probably they’re best described, really, as ‘a project’.

Each TAP song is led by speed and momentum, with almost every number taken from spontaneous idea to completed, listenable take, artwork (and, often, an accompanying video) in just a few hours (that’s about a second or two in KSST – Kevin Shields Standard Time).The rush is an essential ingredient, and a few songs have been abandoned midway when it’s clear they’d require lengthy noodling.

Other things that often take longer than the creation of a typical TAP song:

· Watching The Godfather Part 2
· Observing a couple, with a baby, park a car and remove from its boot items essential for a lunch in a café thirty yards away
· Resolving, via telephone, an issue that doesn’t make a large company more profit

Back to our B&Q shelf for a moment: although TAP explores a few styles of music, in general, you’d find them in the Indie aisle, probably between the Twee and Shoegaze sections. Led by just one person in one room, lurking close by, and keenly watched by the not-obvious-at-all store detective, would be a gang of contributors: Paul McKeever, a singer/songwriter from Larbet, Scotland, Marshmallow Fortresses, a musician from the San Francisco Bay Area, USA and, most regularly, Amanda Sanderson, a singer from Newcastle upon Tyne, England. As a non-musician myself, it is astonishing to me that this is largely a one-man band. Did I say band? I meant project. A one-man project, albeit one that welcomes these contributions.

The songs? They’re created for fun above all, and are led by guitars, keyboards, loops and samples – not to mention the odd peppering of toy orchestra lurking low in the mix.

And, yes, Associates fans: the project is named after the band’s debut LP. An Associates sample was being used on a previous project and this inspired the entire TAP idea. I love it when pop does stuff like that.

Much of the stuff by TAP has been brought together on pages at Soundcloud and YouTube, and pointers to these place will be provided in due course.

As I’ve said before, I tend not to feature new or unsigned bands/musicians on the blog, but there was just something thrilling and different about what The Affectionate Punch is/are setting out to do that I wanted to bring things to your attention.  Besides, Strangways is a person of impeccable taste. The idea that music of this quality and distinction can happen almost in what is the musical equivalent of the blink of an eye is astonishing.

mp3 : The Affectionate Punch – I Fear

I Fear was the debut single from the collective, with the video put on YouTube on 10 November 2018 and the song placed on Soundcloud at the same time.

While most of the songs are original compositions, you’ll also be treated to the occasional cover, such as this:-

There’s plenty of instrumentals out there too, with this one being reminiscent of the work of Robin Guthrie:-

And finally, a couple of the more recent additions to the collection:-

mp3 : The Affectionate Punch – Such Is Life

The next steps are to master some tracks that will then be added to Bandcamp, as a free download, as an LP with the title So Long Ago, Goodbye.

There’s also a planned release for a cover of Lene Lovich’s version of I Think We’re Alone Now. It will feature Amanda and Paul on vocals.

I’ve a feeling TAP might be featuring here again in the not too distant future.

2 thoughts on “THE AFFECTIONATE PUNCH”