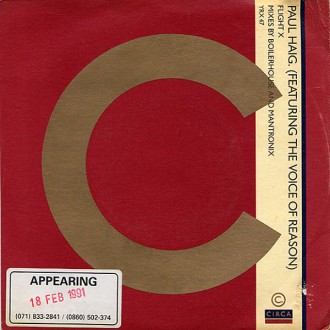 So much promise within the press notes to accompany the release of the single….but when it failed to shift copies in any significant numbers, Circa took the decision to cut Paul Haig adrift, and in doing so chose not to release the album, despite Paul and many others thinking it was as good as anything in his career

All I’ve got to offer today is the 18 Feb release with the vocals provided by Voice of Reason:-

The decison to put the album on the shelf really was the lowest point in a career which had promised much but inexplicably never ignited with the general public.

Some old friends did,however, come to his rescue……as next week’s edition will show.