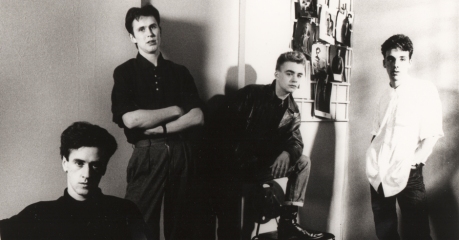 Hipsway were formed in Glasgow in 1984 featuring ex-Altered Images member Johnny McElhone on bass, Grahame Skinner (vocals), Pim Jones (guitar) and Harry Travers (drums). They were quickly signed up by Mercury Records and and after two flop singles, struck payola in March 1986 with this fabulous piece of pop, which reached #17 in the singles chart:-

They toured a great deal in 86/87, including as openers for Eurythmics and Simple Minds, and by the time it came to make a follow-up album, McElhone had quit, going on to form the multi-million selling Texas.  The remaining three members went into the studio and presented the label with an album called Scratch The Surface, but there were delays in getting into the shops and in the interim the band split for good.

Skinner and Jones continued to work together on other projects for a number of years before also going their separate ways, although they each remained active in the Scottish music scene.

The duo decided to get back together as Hipsway to play some gigs to mark the 30th Anniversary re-release of the self-titled debut album and were pleasantly surprised to sell out a number of shows at decent sized venues in Glasgow.  This led to them reforming on a more permanent basis, writing and recording new material, with the album Smoke and Mirrors due for imminent release before an extensive Scottish tour this coming December, including a gig at the Barrowlands.