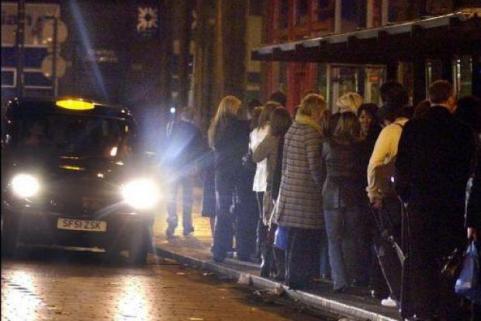 I’m placing these two songs together in one posting as  I reckon they are very close cousins. Both tell the story of being out on the town and the immediate consequences thereafter.

In which Terry Hall wonderfully narrates the tale of someone who has gone out and had a predictably awful and all too common end to his night.

I can’t talk and I can’t walk
But I know where I’m going to go
I’m going watch my money go
At the Locarno, no

Back in 1981, most towns and cities in the UK had a limited choice for young people looking for a decent night out. The pubs, for the most part, catered for all ages and you stood a good chance of bumping into older folk who were on more than nodding terms with one or more of your family. The choice of booze was limited depending on the brewery to which the landlord or ale-house was attached. Males would be in the bar area and females would be in the lounge….the idea of both sexes mingling in a pub was fairly alien. Which is one of the reasons almost everyone aged 16-25 went to the equivalent of Terry’s Locarno as that was the only place you could engage with someone of the opposite sex; such places were referred to most often as cattle markets.

Oh, and you could just completely forget the any sort of above ground nightlife for anyone who wasn’t hetero….

In which Alex Turner wonderfully narrates the tale of a group of lads who have gone out and had a predictably frantic and manic end to their night.

We’ll ask if we can have six in
If not we’ll have to have two
Well, you’re coming up our end, aren’t you?
So I’ll get one with you

Won’t he let us have six in?
Especially not with the food
He could have just told us no though
He didn’t have to be rude

You see her with the green dress?
She talked to me at the bar
Wait, how come it’s already two pound fifty?
We’ve only gone about a yard

And I’m sitting going backwards
And I didn’t want to leave
I said, “It’s High Green, mate
Via Hillsborough, please”

Well, how funny were that sketch earlier
Up near that taxi rank?
Oh no, you would have missed it
Think it were when you went to the bank

Well calm down, temper, temper
You shouldn’t get so annoyed
Well, you’re acting like a silly little boy
And they wanted to be men
And do some fighting in the street
They said “no surrender
No chance of retreat”

And so why are they in the taxi?
‘Cause I didn’t want to leave
I said, “It’s High Green, mate
Via Hillsborough, please”

Drunken plots hatched to jump it
Ask around, “Are you sure?”
Went for it but the red light was showing
And red light indicates doors are secured

Things had changed greatly by the time the 21st Century beckoned. Towns and cities, for the most part, have pubs which cater specifically for young folk. The choice of drink is beyond the dreams and imaginations of those of us who did our growing up with The Specials, as indeed is the way it is now consumed. There’s still some element of groups of guys hanging around together but nowadays you’re just as likely to see as many groups of gals….who are more than capable of displaying every behavioural characteristic of the male species. There’s still the equivalent of The Locarno but there’s also loads of other clubs catering for all tastes…..and whisper it, there’s even tolerance (now and again) for people of the same sex to be walking the streets holding each other’s hands.

One other thing to note which is also reflective of how things have changed since the early 80s. Terry’s resigned sounding tune has the pace and temp which points to the night, to all intent and purposes, being over and done with now once you join a queue for the taxi home. Alex’s frantic and speedy number lets you know that the night is still young and there is still so much to enjoy and experience……

Oh and for the benefit of our overseas readers, here’s my translation of the Arctic Monkeys lyric:-

“Why wouldn’t that cab driver take all six passengers? It means we’ll have to get two taxis now to the Sheffield suburbs but mind and eat all of your kebab or fish’n’chips beforehand as the drivers don’t let you in if you’ve got food.

“Wasn’t that the most brilliant night? Was nearly perfect for me what with that stunner in the green dress chatting me up for ages. I was bitterly disappointed when that rich bloke came up and bought her a drink – I can’t afford to splash out on these bottles that the girls go for….money is tight. Talking of which, how come the taxi meter is showing it’s already £2.50 when we’ve hardly left the rank. Hang on a minute till I remind the cabbie that we’re going to mine at High Green but dropping you off at Hillsborough”

“Did you see the fight between those two daft lads? No, you wouldn’t have as you were up at the cash machine getting some more money. To be honest, it wasn’t really a fight more a shouting match but it could have escalated given they were both really drunk.

“Here mate, I’m not sure I really want to go home – it still feels as if there’s fun to be had down here in the town. Let’sopen the doors and jump out when he next comes to a halt at the traffic lights and we can run off without paying.

What do you mean it’s a taxi with doors that automatically locks when it’s sitting still? Is that what that red light down there means? Effin hell……..”