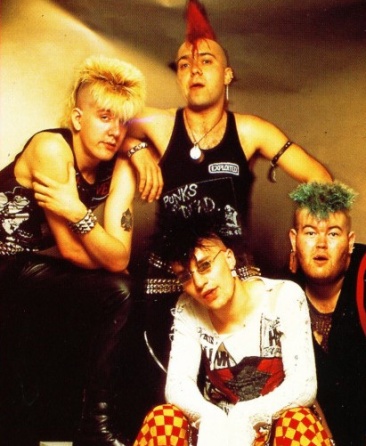 Adapted from one of my reference books :-

In 1981, after a minor hit Dogs of War on Secret Records, they unleashed a whole album’s worth of two-minute wonders, Punk’s Not Dead which went into the Top 20, quickly pursued by Dead Cities, which reached #31 in the singles chart in November 1981.

Big John Duncan left at the end of 1982 to form The Blood Uncles before joining Goodbye Mr Mackenzie. Almost a decade later he would find world fame when he played with Nirvana for a short time.

The 80s saw a few other changes, with Willie Buchan, brother of Wattie, moving behind the drumkit and Gary McCormick leaving. The band went through a waft of bassists and guitarists, with the Buchan brothers being the only settled members for the most part. Throughout that decade, and indeed the 90s and since the dawn of the 21st century, The Exploited have soldiered on, gaining and maintaining a reputation as a loud, anarchic and uncompromising hardcore punk band with attitude. Their gigs are not for the faint-hearted. And many of their records are an acquired taste.

PS : Click here to read more about Jacques the Kipper being on first name terms with Wattie Buchan.

One thought on “SATURDAY’S SCOTTISH SONG : #92 : THE EXPLOITED”