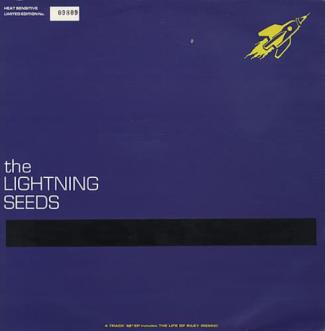 The Lightning Seeds released their sophomore album Sense in April 1992. The first single lifted from the LP had been The Life of Riley which, for a pop song of such quality, disappointingly stalled at #28.

The label decided that the follow-up should be the title track of the LP, a song that Ian Broudie had co-written with Terry Hall. Again, it was another 45 tailor-made for radio play and to further boost sales it was decided that the 12″ version should not only contain a wonderfully dreamy remix of the previous single but two very fine cover versions, one of which saw Ian’s new band tackle a song by his old band while the other was a rather gorgeous piano ballad. Oh, and a gimmick was thrown in too, with the sleeve having a special strip that was sensitive to heat and when warmed in any way would reveal the word ‘Sense’ as if by magic. It worked too…although it was useful to remember to remove the actual record from the sleeve in advance so that you didn’t do it any damage.

None of which, however, led to any huge sales and the single stalled at #31 despite, as I mentioned earlier, having four songs of genuine quality:-

A sunny foursome which seem appropriate for this time of year.

3 thoughts on “A RATHER UNUSUAL SLEEVE”