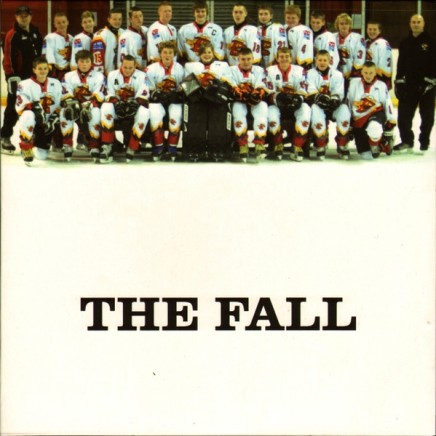 The three Americans take their leave after Primavera on 1 June 2007. Job done.

It’s only a matter of weeks, however, before The Fall are due back on stage, including three successive nights in London.  David Spurr stays on with MES and Elena Poulou, and the line-up is augmented by Kieron Melling (drums) and Pete Greenway (guitar).   What nobody knew, and what nobody would have dared predict, was that this line-up would more or less remain unaltered until MES’s death in 2018.

The first studio release by the new line-up was the album Imperial Wax Solvent, issued by Slogan Records in April 2008.  No singles are taken from the album.  It proved to be the last original record in the partnership between The Fall and Sanctuary, the parent company of Slogan Records, albeit there would be further compilations and box sets in future years.

The stability of the new line-up probably helped those at Domino Records feel confident about making an approach to MES, and a contract was signed that would see a new album issued in Spring 2010. In the meantime, a limited edition tour single, on 7″ and CD, was released, by Action Records, in November 2009.

The first two tracks are originals, with Slippy Floor credited to Smith/Greenway, while Hot Cake is the work of Smith/Spurr. Both are excellent, with Hot Cake showing a mix of the old rockabilly style of the band and the harder rockier sound being offered by the new musicians, while Elena’s backing vocal contributions are a reminder of the Brix era.

The third track is a cover, this time of a song by The Groundhogs, an English rock and blues band, founded in 1963, and which remained active until 2015, when founder Tony McPhee (who was the composer of Strangetown), was 80 years of age. The original version of the song dates back to 1970, being the opening track on the album Thank Christ For The Bomb. The live version included on the single was recorded at the Electric Ballroom in London, in April 2009.  Unfortunately, I couldn’t track down the live version included on this particular release, so you’ll have to make do with the studio version, which was included on Imperial Wax Solvent.

Slippy Floor and Hot Cake would later find their way onto Your Future Our Clutter, the album which met the contractual obligations with Domino, although there would also be a single issued on Domino before the band took their leave of the label. Tune in next week for details.