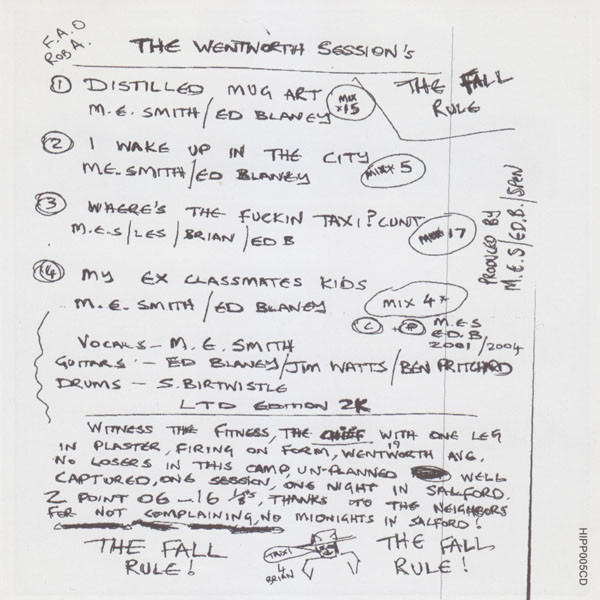 Remember a few weeks ago when Rude (All The Time), released as a single in 2001, was featured in this series?

I can’t really tell you much about this other than what I’ve found at various fan websites devoted to The Fall.

I failed to mention a few weeks ago, the release of 2G+2, an album from 2002 which consisted partly of studio tracks and partly of live numbers, recorded at various times during a tour of the USA in 2001. It was actually the first release on Action Records, pre-dating the Susan vs Youthclub single by a few months.

Distilled Mug Art was the opening track on 2G+2, and by all accounts the version on this particular EP doesn’t greatly differ, as I haven’t been able to track down Mix 15, so you’ll have to make do with this:-

The EP also included I Wake Up In The City, which had first appeared as the b-side to Rude (All The Time) when it had been released as a single in 2001 and was posted a few weeks ago.

My Ex Classmates Kids also appeared in this series recently, thanks to it a live version being a b-side to Theme From Sparta FC #2.  I really don’t feel there’s any merit in going digging for these particular versions and posting them today.

Which leaves us with this|:-

One of the group’s more notorious tracks, this is a recording of a drunken conversation between MES, Ed Blaney and a couple of others over a taxi which somehow fails to arrive. There’s no music as such except for an acoustic guitar lazily strummed from time to time. Not surprisingly, it has never been played live.

I think it’s fair comment to suggest that this particular single is of very little merit, and I did think about bypassing it altogether.  But with just 2,000 copies in circulation, it is a sought-after artefact among the completists (which I most certainly am not!).  Oh, and in recognition of its insignificance, I’ve altered the title of the series this week.

Finally, the label on which this was released was Hip Priest, an imprint primarily brought into being to issue live recordings from back in the late 70s and early 80s.

I bet there’s not a worse posting than this on any music blogs the world over on Easter Sunday 2022.

6 thoughts on “THE FRIGHTENING SERIES FOR SUNDAYS (Part 43)”