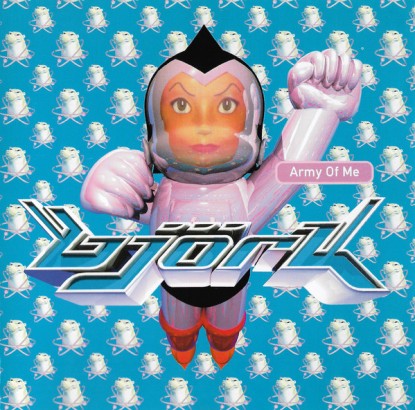 The traffic to the blog slows up over the Festive period, and it’s therefore something of an opportunity to take a bit of a breather.

Over a period of 26 days, I’ll be posting a single never previously featured on its own before – it might have sneaked in as part of an ICA or within a piece looking at various tracks – with the idea of an edited cut’n’paste from somewhere (most likely wiki) and then all the songs from either the vinyl or CD.

A is for Army Of Me, a song recorded by Björk for her second studio album Post.

The single was released in the United Kingdom on 24 April 1995 as a cassette and two-CD single. The first CD contained the Icelandic version of You’ve Been Flirting Again and the cave version of Cover Me, both from Post. The latter was recorded in a cave in the Bahamas, and sounds of flying bats can be heard in the background. The single also contained Sweet Intuition. The second CD contained, among other remixes, a version which features Skunk Anansie.

Army of Me was notable for the fact that, in contrast to the sweetness and lightness to be found on Debut, it features Björk making heavy use of screaming vocals.

Björk, in a contemporary press interview, explained what the song was about:-

It’s a song for the movie “Tank Girl”, but it is actually about my brother. He is pretty lazy and likes things like food, sex, sleep – very basic needs. It’s just that he does it more than others.

Then he started smoking, well, not cigarettes. It felt as if he was in a coma. He just sat on his butt complaining, “the worlds stinks, I can’t get a job, there are no good albums to buy and even if I wanted to buy them, I don’t have any money to buy them with. Blah blah blah.”

Self-pity from morning to night, which really pisses me off. You can stand a whining brother to a limit, but for ten years, from he was 14 to that he turned 24. I simply had enough. That’s it. Stand on your own legs, get a job, get a life. And if you complain once more, you’ll meet an “Army Of Me”.

Army Of Me entered the UK singles chart at #10. Björk went on Top of The Pops and chose to offer up the Skunk Anansie version of the song. It’s one of the greatest moments in the history of the show.