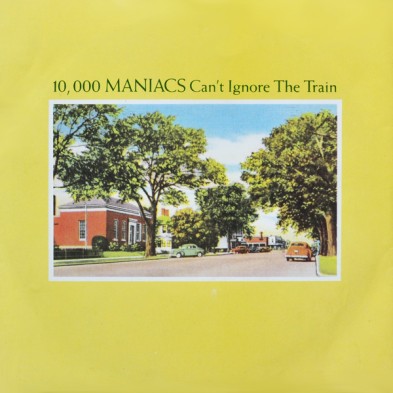 10,000 Maniacs, from Jamestown in the state of New York, came to prominence in 1983 after the self-recording of a debut album which they released on their own label.   The following year, having made something of a buzz in the UK after being championed by John Peel, the band was signed to Elektra, part of the Warner Bros. empire. The early part of 1985 saw them in London recording their debut album, released a few months later as The Wishing Chair, with veteran producer Joe Boyd enlisted to help.  Boyd had just finished working with R.E.M. on Fables of The Reconstruction, and I think it’s fair to say he ensured the sound of the Athens, GA band would have an influence on the new album he was assisting with, as best can be heard on the first single lifted from it:-

It’s just under three minutes of shimmering and wonderful indie-pop, thanks in particular to the tremendous guitar playing of the late Robert Buck.  I’d actually forgotten just how great this single sounded until it was aired recently at the Little League night in Glasgow a few weeks back, and this led me to digging into Discogs to pick up another copy as a very belated replacement for the one that was lost many years ago.

I played the b-side, which I can’t remember doing so back in 1985, although I must have done so on at least one occasion.  Listening now, I reckon I must have dismissed it on the grounds that it was too quirky and too different from the majestic a-side.  The thing is, I now have almost an additional 40 years of reference points, and so can confidently say that the lads in Vampire Weekend must have found a copy in some second hand store as they went about writing their own material in the first decade of the 21st century.

All in all, it’s a fairly decent debut 45 for the major label who must have been bemused that it didn’t make any inroads into the charts.  Having said that, R.E.M. were also being largely ignored in 1985.