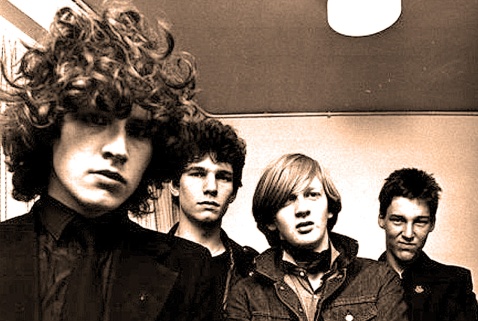 From the archives of the Edinburgh Evening News, 27 October 2017:-

Scars were a post-punk quartet who briefly kissed the canopy of British pop at the dawn of the eighties. They formed in early ‘77, the brainchild of guitarist and bassist brothers Paul and John Mackie. A window ad in Hot Licks on Cockburn Street helped complete the line-up, with vocalist Robert King and original drummer Calumn Mackay entering the fray.

Intensive rehearsals followed and by autumn the teenage punks were ready to greet an audience. The gig took place at Balerno Scout Hall, close to where the Mackie brothers grew up.

“We performed in the place we rehearsed. We just put tickets on the door – that was the only difference,” explains King, now 56.

“We played the Wig & Pen, The White Hart, The Nite Club, but Clouds in Tollcross was THE place at that time,” says Research, 57. “We played there with The Buzzcocks, Penetration, The Rezillos, The Skids…

“Our defining moment, though, was at Craigmillar Castle Park for the Rock Against Racism gig, where we took our underground, glamish, punk stuff to the biggest possible audience you could imagine in Edinburgh.”

Scars eventually signed for fabled local indie label, Fast Product, notable for issuing early releases by the likes of The Human League, The Gang of Four, The Mekons and Joy Division.

The group cut their first single in 1979, “Adult/ery” backed by “Horrorshow”. The latter would later be described as “Scotland’s Anarchy In The UK”.

Following their 7” success, the band signed for PRE Records, a subsidiary of UK major Charisma. Their debut album, the outstanding “Author! Author!”, arrived in 1981. The album earned five stars in Sounds magazine and a rave review from the NME’s Paul Morley.

“The whole purpose of our lives at that moment was that album,” says Robert, wistfully. “Paul Morley called it ‘probably the greatest ever debut album ever made’, so how much can you fail?”

The album was classic Scars but with a noticeably more commercial edge than previous efforts. It was the sound of a band on the up and hungry for success. It was post-punk.

“I was never that idiotic that I thought punk rock was gonnae be the be all and end all of everything,” explains Robert, “I got into music because of Marc Bolan and David Bowie. They taught you to be yourself.”

And being yourself was vital to Robert King.

“I used to slag Davy (Henderson) from the Fire Engines because he sang in a fake American accent. That doesnae work for me. People think New York is cool, why can’t Leith be cool? Why should it be any different? I never got that.”

Side A begins with “Leave Me In Autumn”. Three minutes of post-punk perfection driven by John Mackie’s ballistic bass lines and some expert lead work from Paul Research are accompanied by some of the most beautifully-bleak lyrics ever written.

“I won the St Anne’s Jesuit prize for poetry for that when I was twelve,” Robert tells me, “I got eight pounds or something, bought me loads of books.”

Arguably the most cross-over track on “Author! Author!” is the single “All About You”, one of British music’s forgotten gems. Drummer Steve McLaughlin, replacement for Calumn Mackay, made the Scars danceable with his discotheque beats. And the song’s video – shot in Edinburgh in 1981 – has since become a fascinating artefact of the Capital as it was.

“We came out with this chorus and really nailed it with that rousing, anthemic kind of thing,” reveals Research. “The video cost a lot of money to make but at that time there was no MTV, no internet, or anything, so we made a promo film that no-one could see. We really did step up and out of the mould and everything like that but at the same time it was stupid because it was a waste of money. That said, it’s legendary within my family. If ever there’s a family wedding, or anything like that, it’s always the last song of the night.”

Robert King’s take on the track isn’t quite so positive.

“We had a gap in the album and they wanted a single. So Paul came up with the idea of a single. So I thought: ‘well, what’s a single? Sortae like The Beatles and s**** like that?’. So I wrote a song like The Beatles. Done in five minutes. It didnae make any sense either but it sounded like a pop song so we did it. People think it’s a love song. It’s not. It was written on the spot, so it’s unfair to even call it a Scars song.”

The album catapulted Scars into the mainstream. An appearance on the Old Grey Whistle Test, a brace of Peel Sessions and a slot on the cover of the NME marked their zenith.

But sadly, in spite of the very title “Author! Author!”, there would be no encore. Frontman Robert King quit, and, despite their best attempts to soldier on without him, the Scars disbanded in 1982. But their efforts had not been in vain. They had successfully bridged the gap between punk and new wave, and, crucially, inspired others.

“Without us there would be no Fire Engines or Josef K, Orange Juice, etc.,” asserts King, “None of that would’ve happened the way it happened. It never got to where it should have got,” he continues, “We could have been famous, but fame is not really important.”

Paul Research agrees the band never reached its full potential, nonetheless, he appears to be happy with his lot.

“Scars seems to be bigger now than it ever was back in the day. There’s more interest from a wider group of people than there ever was. I attribute that entirely to the rise of the internet and social media.”

The last few years have indeed witnessed Scars’ music undergo something of a renaissance. In 2007 “Author! Author!” was released on CD for the first time. The album sold out its first pressing in just three months.

Then came the moment an entire generation of fans had been aching for.

On December 29, 2010, Scars, boasting their original 1977 line-up, joined TV21, Malcolm Ross and special guests for a benefit gig at the HMV Picturehouse on Lothian Road.

It was quickly followed by an intimate show at nearby Citrus Club the same night.

The reunion would never be repeated, but, for a brief moment, there they were: the four of them on stage together in the city where the buzz began all those years ago.

Scars: Where are they now?

• Calumn Mackay lives in France where he works in hi-tech. He plays drums for a band called Garvin

• Steve McLaughlin lives in London as a film music producer

Maybe it was a subconscious Glasgow/Edinburgh thing for me back in the day, but I never found Scars to my liking.  I did buy the debut album in 1981 but gave it away soon after in a swap with an old schoolmate for his copy of The Modern World by The Jam as my own copy of that record was scratched and jumpy.

The reference in the above newspaper article doesn’t mention that the story of Scars featured prominently in the documentary Big Gold Dream, released back in 2015, and to which I had the great privilege of attending the world premiere at the Edinburgh International Film Festival, as lovingly recounted in this blogpost.

I signed off with these words….

One thing the documentary did was make me realise and appreciate was just how important The Scars were to the development of the post-punk scene in Scotland. I’ve only ever been familiar with their one LP, Author Author, released in 1981 on Charisma Records and to be honest I’m not a fan of it. But it became quite clear from the film and the Q&A session afterwards that their one-off single for Fast Product back in March 1979 had lit the touch paper for many musicians, including the four boys that made up Josef K.

It really was a classic 45 and more fool me for not acknowledging it for decades.

Feel free to make your mind upon the song on which the band members disagree…..