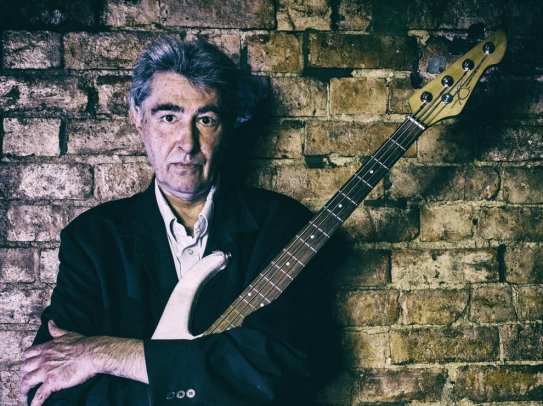 Today’s offering is a tribute to the late Pat Fish, who passed away suddenly, at the age of 63, on 5 October 2021.

I can’t claim to be a huge expert on The Jazz Butcher. Indeed, most of what I have on the hard drive consists of songs included on compilation albums or box sets, although I do have a second-hand vinyl copy of an actual Jazz Butcher compilation – Bloody Nonsense, released in 1986 – which I picked up during one of my trips over to Canada, and while I can’t say that every song is a stand-out or has made a positive impression, there’s been enough to make me a casual fan.

This blog hosted an excellent guest ICA back in March 2018, courtesy of Friend of Rachel Worth.

“The Jazz Butcher in some ways are ideal for an ICA. No wild variations in style and a catalogue of LPs all of which are a bit patchy. Actually getting to grips with their discography is one of the biggest challenges, with various compilation LPs and some tracks appearing on more than one album. Then there is the slight variations of name, sometimes Jazz Butcher Conspiracy, sometimes just Jazz Butcher and sometimes something else entirely.

The line-up changes with the weather (same with record labels) with songwriter and singer Pat Fish being the only consistent factor. All in all they are a tough band to keep track of.

When they are good they are fantastic in a jangly guitar, smart lyrics way. However each LP also either has something that is head-scratchingly awful at best and annoyingly novelty record like at worst.”

Pat Fish was born as Patrick Hunrods in December 1957. As FORW pointed out, he was damn near impossible to pigeonhole as a musician, always looking for ways to challenge his fans and the critics.  He was writing and performing right up to his death, and indeed just two days prior, on 3 October, he had been scheduled to perform a web concert, only instead to appear on-screen at the scheduled time to make an apologetic announcement that he wasn’t feeling well and would re-schedule for about a week later. It is hardly a surprise that his death came as such a shock.

Of the song featuring today, FORW offered these words within the ICA:-

Probably if you know one song by the Jazz Butcher it will be this one. Pat Fish describes it as “The Albatross. A record, I feel, of its time. We were young(ish) and cocky and I think it shows. I still haven’t learned to sing on this one, which bugs me too. Still, it was cheap and cheerful, and it helped us to meet an awful lot of people”

It was actually the debut single, released on Glass Records in 1983.  The following year, it was re-recorded and included on the band’s second studio album, A Scandal In Bohemia, again on Glass Records.  The first version is fast and heavily reliant on keyboards to drive it forward.  It borders on manic in places but at all times it is toe-tappingly superb with a killer sing-along chorus.  The second version is markedly different, like a classy 80s pop song as the keyboards blend with acoustic guitars while Pat Fish sings in a melancholic manner, certainly to my ears, that in places isn’t a million miles removed from Lloyd Cole.  The lyrics are also slightly different, and it is just as equally brilliant in its own way as the original.  I can never make my mind up on which of the two versions I prefer, and that’s why both are on offer today:-

RIP Pat. There’s plenty who will miss you.