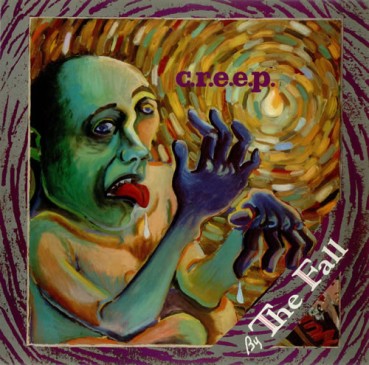 Let’s get a misconception about this one right out of the way.

C.R.E.E.P. is not about recently departed band member, Marc Riley.

Brix Smith‘s book, The Rise, The Fall, and The Rise (2016) devotes a few paragraphs to the song, saying that she was excited by it, not least as she provides ‘bratty backing vocals that contested well with the darkness of The Fall’, and firmly believed it had a chance of cracking the singles chart. She also explains that the lyrics were aimed at another of the many hundreds of individuals who had upset Mark E Smith somewhere along the way, a German tour manager by the name of Scumech, whose name was turned into scum-egg as part of the lyric.  A bit of investigatory work by fans of the band later unearthed that the man in question was most likely Scumeck Sabottka, who would later make a fortune as the founder of one of the biggest online ticketing agencies in Germany – and looking at some of the photos of the man that can be found online, he does look something of a peace-loving, trendy wretch who was fond of ABC.  It would appear therefore that MES never gave him the look of love….

C.R.E.E.P. didn’t sound like anything the band had written, recorded and released up to this point.  It was even more ‘pop’ orientated than Oh! Brother.  It is very much a record on which the guiding influence of John Leckie in the producer’s chair is obvious, and the folk at Beggars Banquet must have been pleased at how it was all going.

Many years later, it would emerge that the tune had been written by the brothers Steve and Paul Hanley together with Craig Scanlon, just after The Man Whose Head Expanded had been recorded, but MES had hated it, throwing the cassette down in disdain, seemingly lost forever.  Brix, while doing a bit of serious cleaning in her new matrimonial abode, found the discarded tape and suggested that it would make for a good song if MES could come up with a lyric.  Still very much in love with his new wife, the cantankerous frontman didn’t let on what he really thought of the tune and in due course came up with the words. Oh, and Brix somehow manages to get a writing credit on the final version, possibly/probably because of the bratty backing vocal…..

I should at this stage owning up to having a real liking for C.R.E.E.P. but not buying it at the time of release, being content to hear it played on a reasonably regular basis at one disco or other in the Students; Union. The problem, however, was that the music critics weren’t all that keen, with some barbed comments that the new-look band, which had undergone a fairly radical image transformation, was now being fronted by the new wave equivalent of Dollar (click here if you need an explanation).  Many fans from way back didn’t care for it either, thinking it was clear evidence of the band selling-out to the man.

Similar to last time out, C.R.E.E.P., released on 24 August 1984, was made available on 7″ and 12″, with the latter being on green vinyl and containing a version which is almost two minutes longer, with particular prominence given to the bass playing skills of Steve Hanley:-

Despite Brix’s hopes, it stalled at #91, just two places higher than Oh! Brother. You might well be able to easily dance in the student unions to the music The Fall were now making, but it still wasn’t making any impact on the wider market of record buyers.

The b-side to the single was inspired by another individual whom The Fall had dealt with while on tour. Again, let’s turn to Brix’s book for the details:-

“The Fall’s American tour manager, Pat was a plump fellow from Hoboken, New Jersey. He was a fun-loving, beer-drinking kind of guy. Mark went to Pat and asked him for some pills. Pat removed a plastic bag full of colourful capsules.”

The capsules were emptied out and duly snorted, but instead of it being the anticipated speed it turned out to be nothing more than powdered caffeine….

It’s an absolute belter of a song…..one which benefits from the polish offered up by Leckie but without going down the truly commercial road. It seemed to bode well for the album that was being worked up……