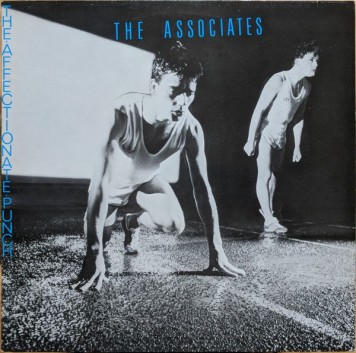 RUMOURS have been dripping down from Scotland about a diverse horde of determined post Skids/S. Minds/Scars groups all ready to shift our attention. Positive Noise, Altered Images, Josef K, Orange Juice . . . the newest rumours centred around The Associates, who it seems were refining the vision of Station To Station, who it seems had a singer who sang like that particular Bowie. He wasn’t copying, that’s how he really sang – from deep inside, neo-operatically.

It sounded ponderous, but The Affectionate Punch is too good, too spectacular to be merely the work of yet another group set to make a career out of one of Bowie’s stops. The Associates have further defined Station’s eerie combination of vitality and disorientation, drawn from is melancholia, and share its European feel. It’s a debut almost as sensational as Real Life – The Associates have things in common with Magazine worth talking about.

That European feel for a start, which basically stems from their liberating remoteness from standard r’n’r influences: the logic and out of the blue maturity of their sound: a Kurt Weill caught up with John Barry cabaret tension: and a respect for the irrational.

Billy Mackenzie is vocally reminiscent of Bowie: but Bowie has never sung with so much delightful range and subtlety, never really had to. Mackenzie’s soul singing is in the pained, proud tradition of Holiday and Garland. He’d be comfortable and do a great job singing ‘Windmills Of My Mind’ (he almost does on ‘Even Dogs In The Wild’). An artist at communication, he takes intense care over enunciation – the shape of words and the space between them. His vocals are either a folly or something very special: I reckon a little of the former, a lot of the latter.
The Associates sound is somewhere between evocative Cure and dramatic Magazine: a passionate cabaret soul music, a fulfillment of the European white dance music Bowie was flirting with back then. It is a fabulist (as opposed to surrealist) entertainment vitiated by a cool sense of art.

Billy Mackenzie and Alan Rankine write the music; Mackenzie the words. Rankine appears to play all instruments with remarkable skill except drums (Nigel Glockler). The ten songs are consistently inventive, ironic, irreverent, written with a light sometimes self-mocking restraint, arranged from a post-Eno, point of view.

The opening two songs are immediately impressive: the stylish cynical title track, typically laced with incidental delights; the almost atomised, light-headed ‘Amused As Always’ – Mackenzie’s singing here at is most absorbed and absorbing. The side’s closer, ‘Transport To Central’, forgoes obvious percussion and is formed around bitter, hedonistic guitars. The guitar sound on the LP is of the Manzanera/Levene/Smith line, lyrical, splintered, very anti-formal.

Individually, Mackenzie’s songs don’t say anything in particular (you could say they’re fashionably vague, but I’m not going to). Nervy, inward-looking images are repeated, reviewed, suggesting a feeling or an action, a mood or a moment. Effectively simplistic, songs about chance, confusion, absurdity, failure, suspense, that never degenerate into the precious.

‘A Matter Of Gender’ is a lush example of The Associates’ private desperation and public drama. ‘Even Dogs In The Wild’ is decadent cabaret, feeling for warmth; a typically clipped swing, finger clickings, a lone whistler in the dark. Mackenzie goes right over the top on ‘Would I… Bounce Back’ but still doesn’t seem to be stretching himself; ‘A’ drags out the group’s amoralism from its usual corner.
Don’t look for message or moral – the songs affect a dreamlike incompleteness but are not unprincipled or uncaring. They develop an account of the various mechanisms by which people remain trapped in boredom, abstraction, essence.

With Mackenzie’s obsessive flamboyance, the invariably plangent melodies, the richly fragmented detail of the songs, The Associates are undoubtedly theatrical. But their sense of theatre is natural, even profound, not the usual pop flash-trivia. The Associates are real performers.

At their worst they are engagingly supra-whimsical, at their best they are potently sophisticated and sensitive. Their well-ordered flair and melodrama seems right for the times: decay music.

The Affectionate Punch is a kind of masterpiece.

It was in 1980, that my tastes began to develop and widen, thanks in part to Joy Division, Magazine, Echo & The Bunnymen and the Bowie of Ashes to Ashes/Fashion/Scary Monsters (and Super Creeps), all of which I felt were a cut above the norm, although there was still no question that The Jam were the singularly most important band ever to have graced the planet at any point in musical history.

I’d love to tell you that I raced out the next day after reading this review and bought The Affectionate Punch, but I’d be lying.  It would take me until the following year, when I had started university, and hearing White Car In Germany for the first time that totally stopped me in my tracks, thanks to it being included on a compilation tape made by a new mate I’d met at university that led to me buying a copy of Fourth Drawer Down, the compilation released in late 1981 bringing together all the singles which Alan and Billy had released that particular year.

I’d love to tell you at the purchase of Fourth Drawer Down then led to me going back to the shop to buy the debut album from the previous year, but again I’d be lying.  I’d not too long fallen in love for the first time with someone who I’d been at school with and her musical tastes were very much on the conservative side, and so I was spending money and time trying to get her to appreciate the more pop-orientated elements of my weird vinyl, which meant anything that didn’t chart stood very little chance of being bought.  But as I started to spend more time with my new pals from uni, and she with her new friends at the bank where she had been taken on as a school-leaver, the relationship withered; it broke my heart at the time, but the consolation was that I threw myself deeper than ever into music.

Fourth Drawer Down wasn’t bought until after the Associates had become famous; even then, it was from someone who, having rich parents and a bulky wallet, bought loads of records on a whim and had found that early Associates was nothing like the pop-era Associates of 1982.  He more or less gave it away to me…..

Paul Morley was right to say that The Affectionate Punch is a kind of masterpiece.  It sounded like nothing else back in 1980. Sadly, most folk only know of it through the 1982 remix, released by Warner Brothers after the success of Party Fears Two/Club Country/18 Carat Love Affair/Sulk, in which the songs were given a fairly radical makeover in terms of production and from Billy being asked, nay forced, to re-record some vocals.  It was a fatal mistake as it found no favour with those who had liked The Associates from the outset and, despite the tweaks, it was ignored by those who wanted a repeat of the chart hits.

And, of course, the album has given its name to a Glasgow-based collective who have featured a few times on this blog over the past two years.  Things have been a wee bit quiet of late with the collective, but watch this space for developments…..

11 thoughts on “ALL OUR YESTERDAYS : THE AFFECTIONATE PUNCH”