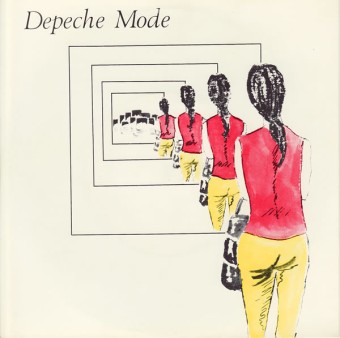 I mentioned yesterday how little reggae I had in the collection. Today, I’m turning my attention to a band of whom I have no physical product, either on vinyl or CD.

It’s not that I dislike Depeche Mode, it’s more that I’ve never really taken to them.  Actually, that’s not true as I did buy their first three hit singles, initially from the period when Vince Clarke was involved and then the first after he took his leave of the band.  All of them were lost back in the disastrous midnight evacuation of an Edinburgh flat in the mid 80s, and I’ve never had an inclination to replace them.

I lost interest early on, thinking they weren’t as innovative or enjoyable as the other synth-acts dominating the pop charts and certainly felt that Yazoo, whom Vince Clarke had formed with Alison Moyet, was a much more interesting proposition.  I certainly had no time at all for the later changes in sound and look, but I was clearly in a minority as the group became international superstars.

The debut single was recorded in December 1980 and released by Mute Records in February 1981 to little acclaim, stalling at #57.  I didn’t buy it at the time, but I became more familiar with it in a later period as a flatmate in my student era had a copy:-

Dreaming Of Me, in some places, is reminiscent of New Life which, just five months later, provided Depeche Mode with their breakthrough UK hit. It’s a song which many bands, and indeed labels, would have looked to re-release once the initial success has been achieved, so fair play to all concerned for not doing so. As such, it is a single with a degree of rarity, and second-hand copies in decent condition, and in a picture sleeve which has somehow managed not to badly age, can cost you in the region of £20 if you’re on the lookout.

This is the first I’ve listened to Ice Machine for well over 30 years. It is certainly less immediate or poppy than many of the songs with which early Depeche Mode are associated, which is no bad thing.

As debut singles so, it was a decent effort. It was worthy of being a bigger hit than #57, but it really was quite hard for synth-pop to get daytime radio play back in early 1981. The emergence of the New Romantic scene would change all that…..

8 thoughts on “IT REALLY WAS A CRACKING DEBUT SINGLE (59)”