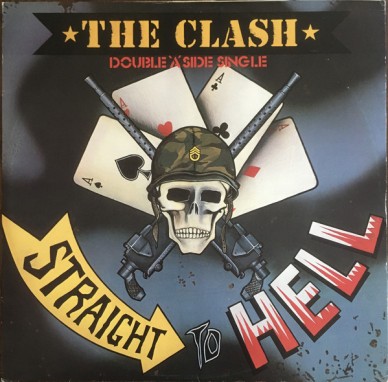 It’s just over five years since this double-A effort was featured in the series looking at the singles released by The Clash.  But this time round the mp3s come straight from the 12″ vinyl, ripped at 320 kpbs for a better listening experience.

Here’s what was said back in May 2016, along with a couple of things offered up in the comments by two of our Stateside regulars:-

“Released just three months after Rock The Casbah, a lot had changed for The Clash in the summer of 1982, not least the fact that they had ‘cracked’ America.  Combat Rock was proving to be an enduring album, going on to spend almost six months successively in the UK charts which was well beyond the time expected of any album by the band. They were now determined to get their music across to as wide an audience as possible, hence the decision to accept the task of opening for The Who at a series of outdoor stadium gigs in October 1982, although it is worth recalling that the band continued to headline at much smaller venues in the States at the same time.

The days of standing up to record company wishes to milk albums dry were also over as seen by the fact that the release of a double A single meant that exactly one-third of Combat Rock had been put out on the 45rpm format.  But in saying this, there’s no argument that it is one of the band’s finest 45s.

Straight To Hell -the very idea that one of the world’s foremost punk bands would, within just five years of their explosive and noisy debut, end up recording and releasing a song that leaned heavily on a bossa nova drumbeat devised by Topper Headon and a haunting violin sound would have been laughable. It has a stunning and thought-provoking lyric delivered by a resigned-sounding Joe Strummer who seems devastated by the fact that musicians cannot make the world’s problems disappear.

Radio stations and the general public however, preferred the charms of Should I Stay Or Should I Go. It has a great riff, a sing-a-long and infectiously catchy chorus and the most ridiculously yet charming backing vocals in some strange version of Spanish.  What’s not to like???

I was a massive Who fan since my sister bought me Who’s Next when I was a little kid. By the time I saw the Clash open for them at Shea Stadium I’d been a dedicated fan since London Calling, which was only 3 years earlier.

I had seen them once at the Bonds shows but the group were still not in the mainstream at that time. I just did not know what to make of the idea of The Clash, who’d been practically underground until a couple of years before, playing for rock giants who’d been at Woodstock and were pretty much on their last legs as a band. It sort of felt, to me, that this massive crowd (Shea was a baseball stadium that held over 55,000 — I’d been watching the Mets play there since 1968) didn’t DESERVE to be in on the act. The vast majority were there to see The ‘Oo, of course, who went through the motions satisfactorily, and I wanted to make a “punk meets the godfathers” mental connection, but just couldn’t.

If I remember correctly, Echorich not only saw many of the Bonds shows but also saw the Clash at the legendary Palladium gig from a couple of years prior, when NO ONE knew the band and they got zero radio play. I wonder what the slightly older than me crowd thought of the only band that mattered opening for the only band that used to matter.

…yes I was at Shea Stadium – I was living walking distance from Shea at the time and one of the photographers I rep’ed at my agency, Bob Gruen – who drove the band to the show in his 50’s Cadillac, got us tix. Honestly, I would have been happy to sit outside the stadium in the parking lot listening to them tear down the house if I had to. But it was a weird feeling seeing a band I loved play in such an impersonal setting. The Clash rose to the challenge, but their show a month earlier, in the pouring rain at Pier 84, courting electrocution and drowning a few thousand in sound as much as rain was one of the most electric shows I’ve ever seen.

I hope, gentlemen, that some further happy memories are triggered listening again to the tracks almost 40 years on.