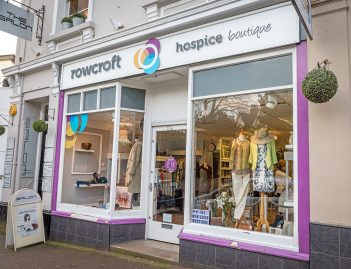 The ladies are looking at Badger and I as if we are weirdos. We are to be honest a little out of place. Essentially Badger and I have walked into a ladies dress boutique thinking that it was a charity shop. It clearly stated ‘Rowcroft Hospice Charity…’ on the front of the shop. We have ambled on in expecting to find a treasure trove of CDs and vinyl but find ourselves face to face with a Margaret Thatcher look alike who is a wearing twin set and pearls and is enjoying Radio 3 in the background. Let me explain…..

Some of you may remember that when Badger, KT and I were writing The Sound of Being Ok Blog (TSOBO) we drew up a manifesto, which we tried wherever we could to put it to the test-o. The manifesto contained at the end 62 rules, which, if followed, would make your life easier and much more enriched. We added to them all the time.

Some were eminently sensible

TSOBO Rule #3 was of course, ‘Never walk past a Charity Shop if its Open’

…….which is why Badger and I are standing inside a small room about to ask this lady if they sell CDs. She is possibly the poshest lady I have ever spoken to, she pulls her glasses, which are on a string of, up over her nose and stares at us, when Tim asks her “Do you sell music in here, love?”.

The lady looks at Tim and there is a sort of disappointed look on her face, we have perhaps dashed a fantasy of hers of us being high class transsexuals. “There is an old box in the back room, next to the staff bathroom, we are sending them down to the town shop, as we really only sell high class fashions in this…emporium.” The words ‘town shop’ is almost spat out in disgust. Tim retorts “It is a very nice charity shop, love”.

I should explain a bit more…

The shop we are standing in is in Wellswood, an upmarket suburb of Torquay (unbelievably), an area where there are no Costa Coffees or Greggs, but Ecuadorian Coffee Emporiums, and Artisan Bakeries that also sell home made artwork for stupidly pricey sums. We didn’t see the word ‘Boutique’ artistically calligraphed onto the shop sign before we went in but on reflection we should have guessed.

We ambled across to the back room and find the box. A sad looking old lady moves a book of the top of the box, the book has Princess Diana on its cover, one assumes she has been spared the indignity of being sent to the town shop. There are about 100 CDs in the box, mostly rubbish but there nestled amongst the James Last CDs and the Greatest Hits of Ken Dodd, is where Badger picks up these two absolute gems. There is also an Ocean Colour Scene CD but we leave that well alone. I toy with the idea of buying the slightly battered copy of ‘Full House’ by Fairport Convention on vinyl that I spy peeking out from behind a scary looking tailors dummy, but I can feel the eyes of the Margaret Thatcher clone boring into my skull, so I leave well alone.

All of which lower middle class oikery brings us nicely to the CDs, the first one is “Ego Tripping At the Gates of Hell’ by the Flaming Lips, an extended EP of sorts that straddled the lull between “Yoshimi Battles The Pink Robots” and “At War with the Mystics”. It contained four new tracks two remixes of the title track and an appalling version of “Do You Realize?”, which spoils what was a beautiful song.

mp3: The Flaming Lips – Assassination of the Sun

“Assassination of the Sun” is pretty fantastic. There is something rather lovely about an earnest sounding Wayne Coyne chirruping away about millions of stars forming a sun machine that churns out pain, if you ask me. Two of the other new tracks are worth your attention, if only because they are slightly different from your average Flaming Lips track.

The first is an instrumental which has wonderfully mellow piano floating through it before it goes full on with the breakbeats and that. Its weirdly hypnotic. The second sees Coyne channelling his inner Nelly and going all R&B on ya ass, and requesting that we ‘Do it all night until the sunrise comes….’. The saucy monkey.

I won’t trouble your ears with the remixes. Instead, lets talk about Franz Ferdinand.

“Tonight” was the third album by Franz Ferdinand and was somehow overlooked by me when it first came out. It came out three years after the brilliant second album “You Could Have It So Much Better” and whilst I was expecting more of the same off kilter post punk art pop, what you get is something very different, well sort of…

‘Tonight’ is much more experimental than the two albums that preceded and those that succeeded it come to think of it. The archetypical ‘difficult’ third album if you like. It’s a bit hit-and-miss if you ask me. Let’s deal with a couple of the hits.

‘Lucid Dreams’ is brilliant, an eight minute synth inspired that roughly halfway through it transforms (totally unexpectedly) into a full on disco stomp monster. Which immediately makes you think, how incredible an entire Franz Ferdinand electroclash inspired disco album would be. If you need further proof of how good that would be then listen to:-

Which is in a similar vein to ‘Lucid Dream’ in that it heavily relies on electronics, it sounds rather like ‘Novocaine for the Soul’ by Eels on a first listen, which is of course a good thing.

6 thoughts on “RIPPING BADGERS CDs (Parts 5a and 5b): THE FLAMING LIPS and FRANZ FERDINAND”