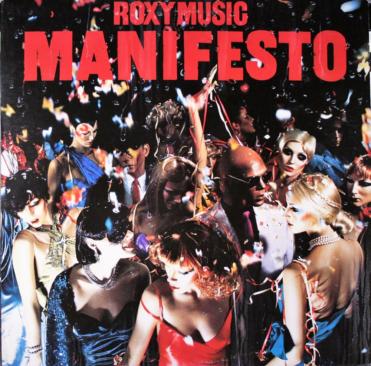 I made mention, when pulling together ICA 250, that Manifesto had been the first Roxy Music album I’d bought at the time of its release, having really been too young to do so when the band had been in their early 70s pomp.

It’s an album I took to quite quickly, but then again having spent hard-earned cash from the paper round on a full-priced LP, there was no way I wasn’t going to sing its merits. The critics, on the other hand, were a bit less enthralled:-

“Ultimately, I found it hard to work up much enthusiasm for Manifesto….the band have come full circle without evolving anything dramatically new – at least – not according to those initial standards … Perhaps greater familiarity with Manifesto will reveal hidden magic. At present, it merely comes across over like an assured modern dip into friendly territory – an entertaining, pleasant album.” (Max Bell, NME)

“This isn’t Roxy at its most innovative, just its most listenable – the entire “West Side” sustains the relaxed, pleasantly funky groove it intends, and the difficulties of the “East Side” are hardly prohibitive. At last Ferry’s vision seems firsthand even in its distancing – he’s paid enough dues to deserve to keep his distance. And the title track is well-named, apparent contradictions and all.” (Robert Christgau, Village Voice)

“So the record has its moments – moments few bands even know about – but as with the brazenly (and meaninglessly) titled “Manifesto,” they add up to little. Ferry announces he’s for the guy “who’d rather die than be tied down”; he’s rarely traded on such banality, and he mouths the lyrics as if he hopes no one will hear them. The sound may be alive, but the story is almost silent.” (Greil Marcus, Rolling Stone)

It was interesting that the second and third singles taken from the album – Dance Away and Angel Eyes – were completely different mixes from those on the album, at least to begin with. The singles were far more poppy and danceable and the fact they were chart hits led to the label bosses choosing to have the second pressings of the album come instead with the remix of Dance Away with even later pressings then seeing the remix of Angel Eyes replace its original version. As I said, they are quite different in style and substance, particularly Angel Eyes:-

The other thing that struck me, many years later, was that Roxy Music album sleeves had been notorious for featuring scantily-clad models but Manifesto’s sleeve consisted of mannequins under disco lights, albeit very stylishly dressed.

There was also a picture disk version of the album made available in which the mannequins kept the same pose but were unclothed, and at first glance, it looked like a group of naked clubgoers.  I’m sure this would have caused untold confusion in the record section of those chains that had a policy of no nudes or offensive sleeves to be on public display within their stores.