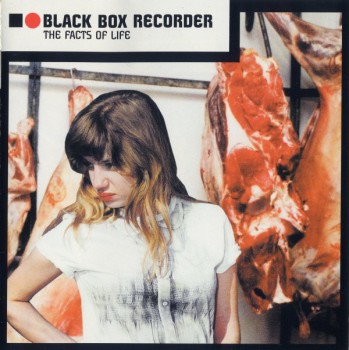 Those facts seem to be as follows – relationships fail, dreams are usually shattered, sex is frequently bad and, if the cover is anything to go by, we are all slabs of meat liable to a few sharp cuts from Black Box Recorder‘s lyrical butcher’s knife. Strangely then, two years after Haines, Nixey and Moore released the scabrous ‘England Made Me’, this has been vaunted as their upbeat album.

It is in part. Because if that debut was defined by the subjects Luke Haines chose to turn his withering eye on, then ‘The Facts Of Life’ is no different. And while Sarah Nixey might still sound as if the daily Stepford wife dose of gin and Valium holds little relief, the shocking news is that Black Box Recorder seem to have cheered up a little.

‘Sex Life’ revels in salacious squelches, ‘Straight Life’ seemingly celebrates happily-married, DIY-enthusiast normality, and even redemption appears on offer as ‘French Rock’n’Roll’ sees a suicidal woman saved from the high-rise belly flop by the power of music. In suitably impenetrable style, however, you can never be totally sure they haven’t got a sneer playing on the corner of their lips.

Especially as elsewhere that clipped, dispassionate vocal is turned upon more familiar terrain. Like the road network as perfect metaphor for disintegrating relationships (‘The English Motorway System’), the drowning of two young Victorians (‘The Deverell Twins’), the innocence of a first kiss dissolving in imagined blood (‘May Queen’), or the closing ‘Goodnight Kiss’ which tours the English fringes and another cancerous relationship and asks –“will the last one to leave turn out the lights” -. It sounds not so much like the end of an affair as an elegy for an entire nation.

If the lyrics have moved on in shades – dark ones naturally – then the music has made several leaps since the spectral atmospherics of their debut. Much has already been made of the title track’s resemblance to All Saints‘ ‘Never Ever’ and Billie’s ‘Honey To The Bee’, but that’s just the start of it. Sugaring the pill to make the lyrical bad medicine slip down all the easier, this is rigged with soulful flourishes, the tinkle of glockenspiel, gently-looped R&B; beats, and the sound of Air hanging out with Pulp to make satin-smooth subliminal pop. Catchy, intelligent and frequently heartbreakingly poignant, it proves saccharine is no bar to excellence.

With ambition matched by achievement, Black Box Recorder’s outlook might be superficially sunnier, but the clouds of their bile still linger on the horizon. Setting about infiltrating the mainstream, Luke Haines and John Moore don’t just want the converted to acknowledge their evil genius, this time they want to inflict it on everyone.

All too often, the reviewers in the NME disappear up their own backsides as they attempt to be way too smart and knowing when they offer up views and opinions on singles and albums.  Not in this instance – this more or less captures what the group was all about – the summary of Air/Pulp and smooth subliminal pop is so accurate.