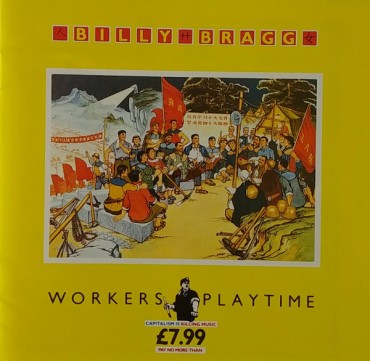 Quite clearly, I wasn’t in Teignmouth when Badger and SWC found themselves in the Oxfam Book and Music Shop when this, along with albums by Apollo 440, Cornershop and Dinosaur Jr were purchased. But that small matter didn’t stop me from offering to write up today’s piece.

Workers Playtime was, at the time of its release, something of a shock to the system for those of us who had followed the fortunes of Stephen William Bragg over the previous few years.  I’d be lying if I said anything other than it was his political songs that had got me on board, and it was these, along with the hugely entertaining and often highly educational monologues in-between the songs that made him such a great live experience. Yes, the love songs were lovely to listen to, especially for the fact that they were far removed from being soppy, often tinged with a sense of self-deprecation and humour, or, in the case of Levi Stubbs’ Tears, (the stand-out track on 1986’s Talking With The Taxman About Poetry), written from a perspective that was thought-provoking and ultimately, incredibly moving.

Come 1988, and Billy Bragg was, to all intent and purposes, a pop star, thanks to his take on She’s Leaving Home spending time at #1 in the UK singles charts.  OK, so it did piggyback on being the double-A side of With A Little Help From My Friends by Wet Wet Wet, with both taken from the compilation re-recording of Sgt. Pepper’s Lonely Hearts Club Band pulled together by the NME in aid of the charity Childline.  The fact remains that while the single was at #1, with maybe 95-99% of the airplay and subsequent sales being due to the Scottish pop/soul combo, it still led to Billy Bragg appearing in the Top of The Pops studio where accompanied by Cara Tivey on piano, he was lauded as being responsible for the best-selling single of the week.

A few months later and Workers Playtime hit the shops.  It came at a time when I was newly married, and although I realised from fairly early on that it wasn’t likely to last, I was in a mindset of being happy and joyous about how life was treating me at the age of 25 – a decent job with a career to build on, a nice house in an attractive small town just outside of Edinburgh, and I’d also reconnected again with a mate from my university days after a few years apart after he left early to try and make it as a footballer while I finished my degree.  I didn’t completely warm to an album filled with slow-paced and anguished songs, albeit the rabble-rousing and joyous track which closed proceedings certainly had something going for it.

I remember at the time Billy saying that he wanted his new record to go in a different direction, partly as a response to the disappointing way that British politics had not moved away from years of Tory rule, but also as he wanted to build on some of the best experiences from Taxman and deliver an album which he would record mostly with a band.  It was only after really enjoying the songs on 1991’s Don’t Try This At Home did I really revisit Workers Playtime, by when my marriage was over and I was in a much different place having been on a real emotional rollercoaster for a long time.  Its songs connected with me so much better.

Many years later, and the Andrew Collins biography of Billy Bragg told the wider and largely unknown story of many of the songs on Workers Playtime, namely that the songs had come from personal and bitter experiences, something that the very private Billy Bragg hadn’t gone into when the album was released. It’s an album written by someone who had fallen deeply in love only for it all to end very badly and for reasons he hasn’t been able to fathom, and in ways he never saw coming.

mp3: Billy Bragg – Must I Paint You A Picture

Thirty years on and the great man, having later found love, happiness and contentment can now make reference to the era when he plays the songs from the album in the live setting. He stands on the stage as if to say to his audience that he knows the answer to the time-old question, ‘What Becomes of The Broken-Hearted?’

I would imagine that, as the years have passed, many people have thanked Billy Bragg for these songs, as they surely have resonated with all of us at some point in our lives.

If these had been written for a Motown artist in the 60s, they’d be held up as amongst the greatest of all time:-

He writes elsewhere of falling in love with a little time bomb; of hating the arsehole he becomes when he’s with her; of thinking that fate has been against them from the very start.

The thing is, Billy Bragg a few years earlier wrote Love Gets Dangerous, one of the tracks on his 1983 debut Life’s A Riot…., in which he accepted that falling head over heels is very very scary, and it was the penultimate and very autobiographical song on Worker’s Playtime which proved that very point, especially when things fail so miserably:-

In among all this, Billy still found time to do the politics – with Tender Comrade, an acapella song about the life and times of a post-conflict soldier, and Rotting On Remand in which he questions the morality of aspects of the justice system.  He also returns to the subject of domestic abuse, with the haunting and majestic Valentine’s Day Is Over.

But the best is left till the end, and I’ll simply repeat the words I used in September 2015 when I pulled together a Billy Bragg ICA.

‘If I was ever asked if there was one song in the world that I wished I had ever written, it would be this.

And here’s a wee confession….without fail it activates my tear ducts despite the fact that it’s not a sad song whatsoever. But it’s a song that makes me think about death for the simple fact is that I want it to be played at my funeral as the mourners depart the service…and I want them all to laugh out loud at the point Billy shouts ‘beam me up Scotty.” You’ll all be welcome to attend.

The best closing song to any album….ever.’

Looking back, it is clear that while there had been evidence on the previous albums, it took until Workers Playtime to really confirm to any doubters that Billy Bragg was way much more than a big-nosed, big-mouthed lefty whose was best at lecturing us with shouty songs about making the world a better and safer place.  This is is when the personal songs began to heavily outweigh the political, both in quantity and in quality, laying the foundation for the remainder of his outstanding career as a musician and entertainer.

Which is why, if asked, I’ll now name Workers Playtime as my favourite Bragg album of them all.